Utagawa Hiroshige (歌川 広重?, 1797 – October 12, 1858) was a Japanese ukiyo-e artist, and one of the last great artists in that tradition. He was also referred to as Andō Hiroshige (安藤 広重) (an irregular combination of family name and art name)[1]and by the art name of Ichiyūsai Hiroshige (一幽斎廣重).

Ukiyo-e (浮世絵 literally "pictures of the floating world"?) (Japanese pronunciation: [ukijo.e] or [ukijoꜜe]) is a genre ofJapanese woodblock prints (or woodcuts) and paintings produced between the 17th and the 20th centuries, featuring motifs of landscapes, tales from history, the theatre, and pleasure quarters. It is the main artistic genre of woodblock printing in Japan.

Ando Hiroshige was born in Edo (now Tokyo) and at first, like his father, was a fire warden. The prints of Hokusai are said to have first kindled in him the desire to become an artist, and he entered the studio of Utagawa Toyohiro, a renowned painter, as an apprentice. In 1812 Hiroshige took his teacher's name (a sign of graduation), signing his work Utagawa Hiroshige. His career falls roughly into three periods. From 1811 to about 1830 he created prints of traditional subjects such as young women and actors. During the next 15 years he won fame as a landscape artist, reaching a peak of success and achievement in 1833 when his masterpiece, the print series Fifty-three Stations of the Tokaido (scenes on the highway connecting Edo and Kyoto), was published. He maintained this high level of craftmanship in other travel series, including Celebrated Places in Japan and Sixty-nine Stations on the Kiso Highway. The work he did during the third period, the last years of his life, is sometimes of lesser quality, as he appears to have hurriedly met the demands of popularity. He died of cholera on October 12, 1858, in Edo.

With Hokusai, Hiroshige dominated the popular art of Japan in the first half of the 19th century. His work was not as bold or innovative as that of the older master, but he captured, in a poetic, gentle way that all could understand, the ordinary person's experience of the Japanese landscape as well as the varied moods of memorable places at different times. His total output was immense, some 5400 prints in all.

The woodblock prints of Hiroshige 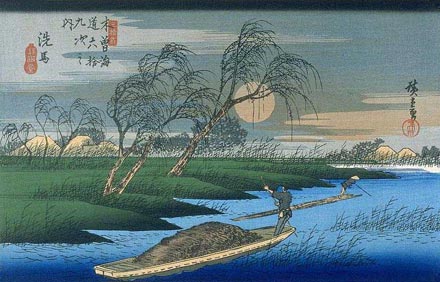 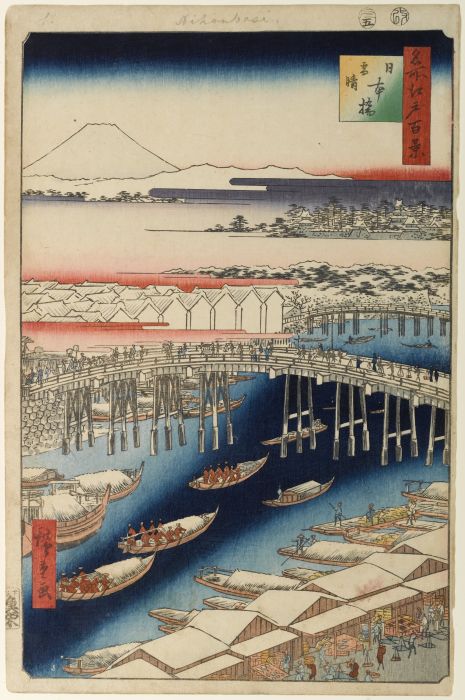