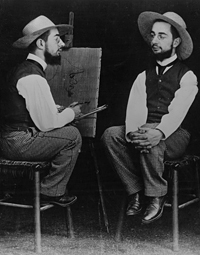 Henri de Toulouse-Lautrec (1864–1901), the quintessential chronicler of the Parisian district of Montmartre, created some of the most memorable images of the exciting new culture of late nineteenth-century France. After moving to Paris in 1872, Lautrec immersed himself in the culture of the district, painting and drawing by day and dwelling in the cafés and cabarets by night. Working in several ateliers, where he became friendly with other young artists enthralled by the district, Lautrec honed his artistic skills. He soon gained recognition in Montmartre, and when his first poster was pasted on walls all over Paris, he became nearly as famous as the advertised celebrity. Lautrec remained prolific, experimental, and original for the next decade, until his death in 1901 at age thirty-six.

Henri de Toulouse-Lautrec’s privileged roots did not make him an obvious fit for the seedy district with which he became associated. The artist was born in the city of Albi, in southern France, into an aristocratic family with ties to the counts of Toulouse, who had once ruled over the Languedoc region of France. His parents were cousins, a common occurrence for wealthy families of the era who were anxious to preserve their lineage. Lautrec suffered the results of inbreeding: abnormally weak bones caused multiple breaks, which stunted his growth and caused him lifelong difficulty with his legs. Barred from many activities, Lautrec became a keen observer, and, with the encouragement of his mother, began drawing and painting in his teenage years.
In 1872, Lautrec and his mother moved to Paris, where, a decade later, he began to study art formally. It was at that time, in the early 1880s, that he began to frequent Montmartre, where he painted its denizens, many of whom were his acquaintances or intimates. In Young Woman at a Table, Lautrec depicted the artist, circus performer, and artists’ model Suzanne Valadon, who posed numerous times for him, as well as for his artistic hero, Edgar Degas, and other Montmartre artists. This genre painting of a lower-class woman alone at a café table—a subject popular with Montmartre artists—illustrates Lautrec’s early experimental work; rapid brushstrokes demonstrate a preference for a new freedom of handling, as did the work of Vincent van Gogh, who was then living in Montmartre and whose brother Theo, an art dealer in Paris, purchased this painting. 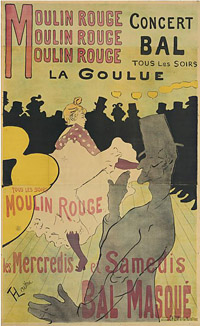 Lautrec was commissioned to create a poster advertising the Moulin Rouge. The artist’s first foray into the art of lithography was a resounding success: one evening in December 1891, three thousand copies of Lautrec’s Moulin Rouge: La Goulue were pasted on the walls around Paris, prompting an outpouring of popular and critical acclaim and turning the young artist into an overnight sensation. Lautrec’s Moulin Rouge poster was far more daring than the comparatively subdued poster by Chéret. The dance hall’s name is repeated three times in an eye-catching design that then draws the viewer’s eye down to the central motif: La Goulue. Born Louise Weber (1870–1929), La Goulue (the greedy one) was a young dancer who turned the cancan into a risqué dance with high kicks and loud shrieks. Seen here with her dance partner Valentin le Désossé (Valentin the Boneless), the provocative La Goulue attracts a sizable audience, rendered by Lautrec in silhouette form. The unusual use of silhouette was influenced by the flat designs of Japanese art then popular among the avant-garde and also by the Chat Noir’s shadow theater productions, in which zinc cutouts were back-lit and their shadows then projected upon a puppet-theaterlike stage. Innovative designs based on silhouettes were perfectly suited for the bold, graphic style of posters and other works of the era.

Critics and the general public alike were struck by the poster’s modern sensibility; it includes bold colors, a variety of lettering styles, and innovative use of silhouettes.

Lithographs (literally, “stone drawings”) are based on the principle that water and oil repel one another. To create a lithographic print, the artist draws on a hard, flat surface—usually limestone—with an oil-based material such as lithographic crayon, which is then chemically “fixed.” Next, the stone is washed with water, which covers the blank areas but is repelled from the image. The greasy printing ink is rolled over the stone, adhering only to the image, while the ink is repelled by the blank wet areas. Finally, paper is laid on the surface and pressure is applied to create the lithographic print, which is a mirror image of the original drawing. Color lithographs simply repeat this process with multiple stones, each dedicated to a different color.
Lautrec’s first lithograph, Moulin Rouge: La Goulue, used four separate stones and inks: black, yellow, red, and blue. Additional colors were created by the layering of these colors, as may be seen in the purplish tones of the foreground figure, and the greenish hues seen on the floorboards. Lautrec also used the technique known as crachis (spatter), which creates mists of color, similar to the effects of airbrushing. This effect may be achieved by either shaking a brush over a sieve, or by running a knife along the edge of a brush to cause the paint to spray. Lautrec’s poster uses three separate sheets of paper to create an image that is almost two meters high and over a meter wide, dwarfing the size of traditional posters of the period and adding to the advertisement’s bold tones and graphic style.
Click here to see the lithograhic process.
Source: nga.gov 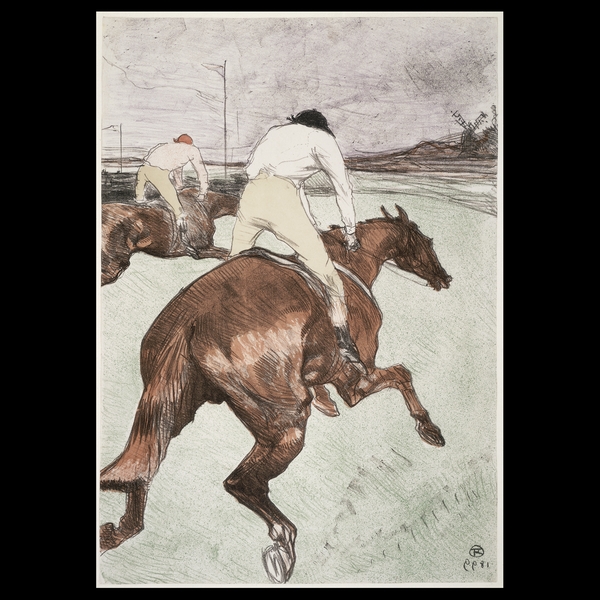 This was one of Toulouse-Lautrec's last lithographs. The publisher Pierrefort intended to issue a portfolio with a racing theme, but Toulouse-Lautrec (1864-1901) was suffering acute alcoholic collapse at this time and this was the only print of the set that was completed. Three further works from the proposed series survive, but only one of these approaches a finished state. The Jockey was issued in two editions, first as a monochrome lithograph, and secondly in a colour version with the addition of five new colour stones.
The print expresses the power and pace of the racehorses, rather than the jockeys who are shown from behind with a total lack of expressive detail. Toulouse-Lautrec's facility as a draughtsman is clear, as is his ability to distort and exaggerate in order to create atmosphere and character, by excessive foreshortening of the horses' necks in this lithograph.
Source: britishmuseum.org