Planographic printing means printing from a flat surface, as opposed to a raised surface (as with relief printing) or incised surface (as with intaglio printing).Lithography and offset lithography are planographic processes that utilize the property that water will not mix with oil. The image is created by applying a tusche(greasy substance) to a plate or stone. (The term lithography comes from litho, for stone, and -graph to draw.)

Planographic printing were called those printing procedures, in which the image is printed from a flat surface. This is chemically prepared in order to hold on to printing ink in places from which they will after it transfered on the paper, while rejecting it in these areas, which will keep blank on the paper.
The process utilizes the property that water will not mix with oil. 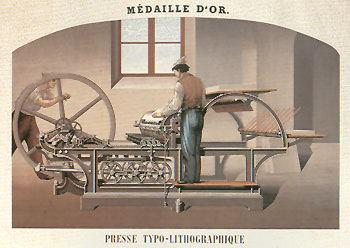 A special planographic printing procedure is silkscreen printing. Here were piece of porous, finely woven fabric (originally silk, but typically made of polyester since the 1940s) stretched over a frame. This is called the screen. Areas of the screen are blocked off with a non-permeable material to form a stencil, which is a positive of the image to be printed; that is, the open spaces are where the ink will appear. In the printing procedure a rubber blade (squeegee) press the ink through the open areas of the screen and transfer it on the substrate. Substrate can be any material, which is flat or flexible.

Monoprinting is a form of printmaking that has images or lines that can only be made once, unlike most printmaking, where there are multiple originals. There are many techniques of monoprinting. Examples of standard printmaking techniques which can be used to make monoprints include lithography, woodcut, and etching.