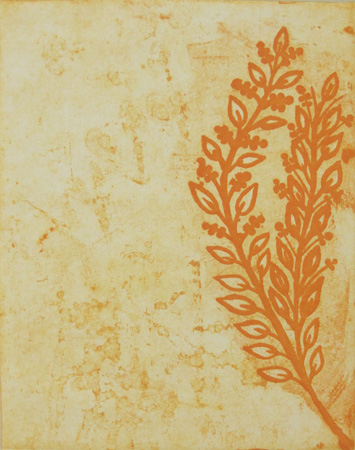 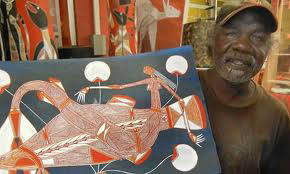 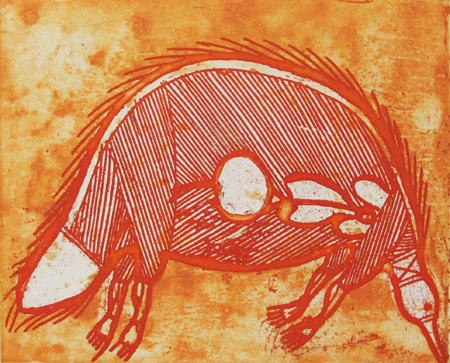 (Echidna) Ngarrbek is the Kunwinjku word for echidna, the small mammal known as spiny ant eater which is indigenous to Australia. Echidnas are one of only two species of monotremes in the world – a mammal that lays eggs. The other is the platypus. Echidnas eat ants and termites and despite such an unappealing diet have tasty flesh and are highly prized as bush tucker.

Kunwinjku people believe ancestral beings travelled through the country creating landmarks and places in which they continue to dwell, known as Djang (Dreaming). Accordingly the Kunwinjku people maintain a profound and ancient visual tradition. Paintings on rock, bark and (more recently) prints connect with ancient rituals, stories and spiritual associations. Rendered simply and directly onto steel plate these etchings narrate the soul and spirit of the Stone Country and its inhabitants. 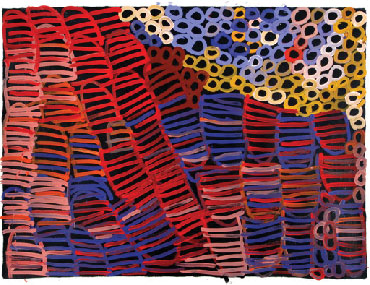 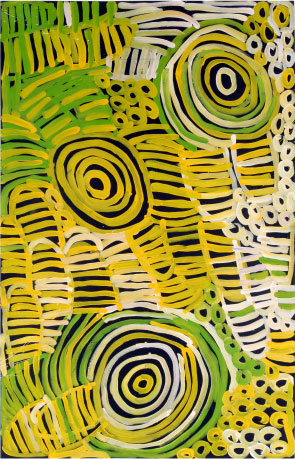 Minnie Pwerle was born around 1922 in the Utopia country of Atnwengerrp and died 18th March 2006. Her languages were Anmatyerre and Alyawarre.

Minnie Pwerle’s emergence and dominance in the world of mainstream art has been compared to the legendary Emily Kame Kngwarreye, who like Minnie, began her painting career in her mid seventies and continued to paint with an energy that belied her age. The power of Minnie’s work is in the bold, expressive simplicity of her linear style which depicts Awelye Atnwengerrp, traditional women’s ceremonies. Her mesmerizing lines and circles convey painted breast designs and dance tracks around camp fires, whilst the smaller tighter circles often seen in her work represent bush melon, one of Minnie’s principal Dreamings. Her canvas’ sing with Indigenous wisdom and a contemporary verve and express clearly the strong connection she enjoyed to both her country and her culture.

Minnie Pwerle exhibited her works extensively throughout Australia and the world with great success. She is regarded as one of Utopia’s foremost artists, with her paintings in continual and constant demand from galleries and private collectors. 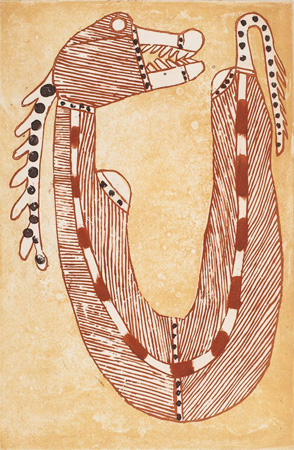 Ngalyod, the Rainbow Serpent is regarded as a most important ancestor spirit in western Arnhem Land and appears in various manifestations in Kunwinjku mythology. In the Dreamtime she assumed a range of animal forms including snake, kangaroo and crocodile and at times transformed her self from one to the other, or into a combination of each. It is believed that as a serpent she tunnels underground using barbed extensions from her head and the bony protuberance from her neck as aids. It is believed that Ngalyod dwells in various billabongs (lagoons) in Arnhem Land today, sometimes swallowing binninj (the Kunwinjku term for Aboriginal person) as punishment when they break traditional laws. Ngalyod is painted by many Kunwinjku artists, according to each artist’s own imagination and mythological background. She is often depicted with the leaves of the mandem (water lily) protruding from her back. 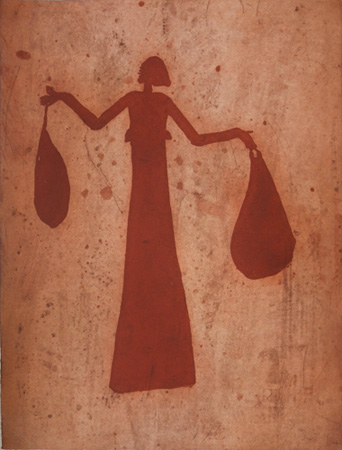 Wamud has depicted Mankung Dans Daluk, Sugarbag Woman, also known as wakewaken from country east of the Mann River. These wakewaken originally lived under a paperbark tree in a creek of cold running water. Ngalyod the Rainbow Serpent is said to reside in this same place. One day the wakewaken left their underwater home and moved around the country gathering bush fruit, which they placed in the burlbe (dilly bags) they carried. Wak, the black crow, saw this and became angry. Thinking they were stealing from his country, he took a stone axe and cut them in half. They transformed into mankung or sugarbag, the honey of native bees and left their imprint as a rock painting in the artist’s Mankung Djang (Sugarbag Dreaming) country.

In earlier days when Aboriginal people from this region wanted to ensure that sugar bag would be plentiful each year, they would swim in the creek and pull up the water weeds near the base of the paperbark tree, where the wakewaken resided.

This plate was created by the artist in 2006 and was printed and signed by the artist prior to his passing. It has also been authenticated with the Injalak Arts & Crafts Association Inc stamp on the back bottom left corner. 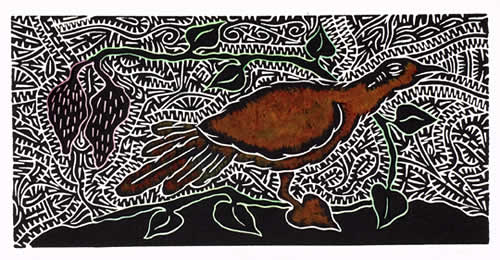 Story: The Maluligal (Western Torres Strait Islands) are less fertile than other parts of the region. Each of the well structered societies in the Maluligal had its own way of foretelling the changing of the seasons. To cultivate their garden successfully our ancestors had an understanding of nature and its signs, which told them when to start planting their crops. 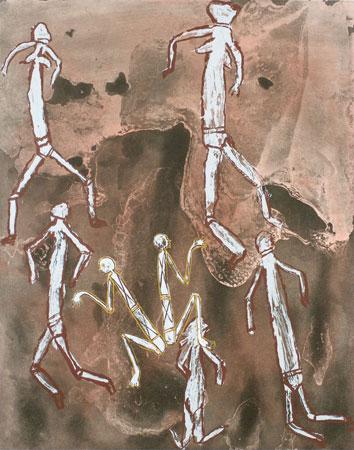 Bardayal ‘Lofty’ Nadjamerrek AO, (deceased) was custodian for country of the upper Mann and Liverpool Rivers in western Arnhem Land, and was revered for his encyclopedic knowledge of the region. Bardayal lived in the heart of Ankung Kunred or sugarbag (native bee honey) country, where he was born and walked while growing up. Through his paintings he brought to life stories of ancestral beings and the fauna and flora of his country. ‘I am looking after this place, this my dreaming place put here by the earliest ancestors, the old people a long time ago, maybe by Djingalawarrewoni or by God … My ancestors gave me this place and I myself have a longing for this country.’ 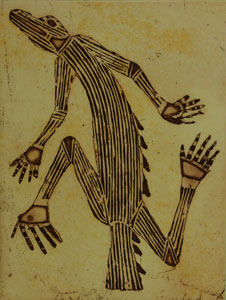 Kunwarrde Bim (Stone Country Painting) is a collection of etchings by nine artists from Injalak Arts and Crafts in Western Arnhem Land. The x-ray images are based on ancient rock art at Injalak Hill, which overlooks the community of Oenpelli.

The kinga (saltwater crocodile) is a highly respected and feared animal that has significance as a food source and a totem to many Aboriginal people in Arnhem Land. Glen has depicted this kinga with a shortened tail, as it appears several significant rock art signs in the area. Although known as the saltwater crocodile, kinga are estuarine and can be found throughout the freshwater courses and billabongs of Arnhem Land.

These prints and the process undertaken demonstrate a tangible link between Binninj (Aboriginal people of the region) their land, art and culture. Unbroken links survive over the millennia, between an ancient life and the contemporary setting which continues to inform its people. Perhaps the final word should go to Gabriel Maralngurra, “we want to help balanda (white people) to understand, that rock art is part of our culture, then and now”. 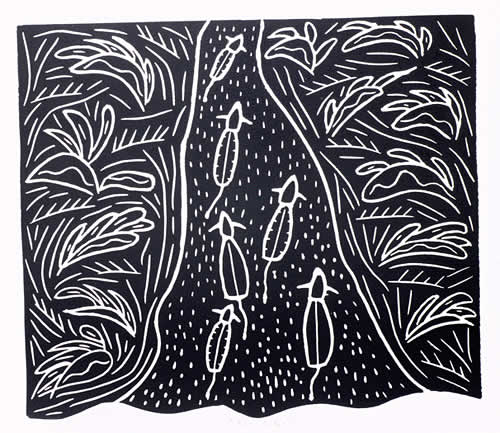 Story: This work is about the environmental damage done by European animals when they came to Australia. It's also about Aboriginal people leaving behind the traditional hunting tracks and following the tracks of the cattle trade. Although, in many cases, indigenous people left behind their culture and traditions to follow a new way, this still reflects the basics of the culture's survival and adaptation.