Evaluating online information these days is not like it used to be!

The things we used to be told to look for in our evaluation of information are easy to fake. It's really cheap to get a good-looking site nowadays. You can be a disinformation agent from China or Russia and still use spell check. Anyone can add footnotes to make something look more serious (students do it all the time!) The same holds for using scientific language.

And a lot of things we used to be told to look for have no basis in reality at all. Current fact checking researchers have found that students believe

To put it simply — the things that might mean something are easy to fake, and the checklist we used to teach in evaluating online resources just doesn't work anymore.

The history of .org

Why the CRAAP test doesn't work.

Watch the rest of the playlist.

It's important to practise click restraint when researching online. This means not clicking on the first search results you see, but scanning the page, the title, source description, and featured sections, before selecting sources. Follow the practices of fact checkers, who exercise critical caution by recognizing that not all sources are reliable. This will help you avoid “rabbit holes” and misleading information.

While some sources are primarily informative and others are more opinion-driven, almost all sources reflect a certain perspective (and along with it some degree of bias). This perspective influences what information the creator includes or excludes and how they present that information.

Rather than looking for sources that are completely free of any bias, recognize that most sources have some degree of bias. This is not necessarily a bad thing: people's personal experiences and viewpoints often provide important insights into an issue. Consider what the source creator's perspective is, what expertise they have on the topic, and what evidence they use to support their claims or arguments. Verify evidence by reading laterally and looking at other sources, including ones that may present a different perspective that is still well supported by evidence.

Our brains are wired to believe things that fit with our preexisting views and to disbelieve those things that challenge our views. This phenomenon is called confirmation bias.

Confirmation bias plays a powerful role in how we evaluate and use information. It's a major reason that misinformation easily spreads online. Learn more from this video about how confirmation bias influences us and we can counteract it. 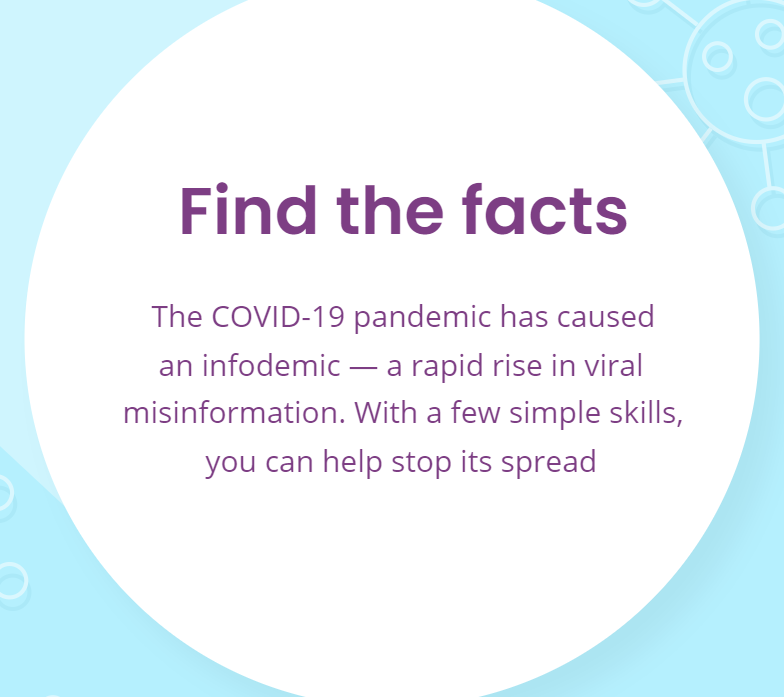 Checklist for information on social media and websites

In this method, these skills are called “moves” and each one is tied to a couple of simple skills you can usually execute in less than a minute.

These skills will make a dramatic difference in your ability to sort fact from fiction on the web (and everything in between).

The first move is the simplest. STOP reminds you of two things.

First, when you first hit a page and start to read it — STOP. Ask yourself whether you know and trust the website or source of the information. If you don't, use the other moves to get a sense of what you're looking at. Don't read it or share it until you know what it is.

Second, after you begin the process and use the moves it can be too easy to go down a rabbit hole, chasing after more and more obscure facts or getting lost in a "click cycle". If you feel yourself getting overwhelmed in your fact-checking efforts, STOP and take a second to remind yourself what your goal is. Adjust your strategy if it isn't working. Make sure you approach the problem at the right amount of depth for your purpose.

More about this later. The key idea is to know what you're reading before you read it.

This doesn't mean you have to do a high powered investigation into a source before you engage with it. But if you're reading a piece on economics by a Nobel prize-winning economist, you should know that before you read it. Conversely, if you're watching a video on the many benefits of milk consumption that was put out by the dairy industry, you probably want to know that as well.

This doesn't mean the Nobel economist will always be right and that the dairy industry can't ever be trusted. But knowing the expertise and agenda of the source is crucial to your interpretation of what they say. Taking sixty seconds to figure out where it is from before reading will help you decide if it is worth your time, and if it is, help you to better understand its significance and trustworthiness.

In this case your best strategy is to ignore the source that reached you and look for other trusted reporting or analysis on the claim. In other words, if you receive an article that says koalas have just been declared extinct from the Save the Koalas Foundation, the winning strategy may be to open up a new tab and find the best source you can that covers this, or, just as importantly, scan multiple sources to see what the consensus seems to be. In these cases we encourage you to "find trusted coverage" that better suits your needs — more trusted, more in-depth, or maybe just more varied.

Do you have to agree with the consensus? Absolutely not! But understanding the context and history of a claim will help you better evaluate it.

Trace claims, quotes, and media back to the original context

A lot of things you find on the internet have been stripped of context. Maybe there's a video of a fight between two people. But what happened before that? Who started it? What was clipped out of the video and what stayed in? Maybe there's a picture that seems real but the caption is dubious at best. Maybe a claim is made about a new medical treatment supposedly based on a research paper — but you're not certain if the paper supports it.

In these cases we'll have you trace the claim, quote, or media back to the source, so you can see it in its original context and get a sense if the version you saw was accurately presented.

There's a theme that runs through all of these moves: it's about getting the necessary context to read, view, or listen effectively. And doing that first.

One piece of context is who the speaker or publisher is. What's their expertise? What's their agenda? What's their record of fairness or accuracy? So we investigate the source. Just as when you hear a rumour you want to know who the source of it is before reacting to it, when you encounter something on the web you need the same sort of context.

When it comes to claims, a key piece of context includes whether they are broadly accepted or rejected or something in-between. By scanning for other coverage you can see the expert consensus on a claim, learn the history around it, and ultimately land on a better source.

Finally, when evidence is presented with a certain frame — whether a quote or a video or a scientific finding — sometimes it helps to reconstruct the original context in which the photo was taken or research claim made. It can look quite different in context!

In some cases these techniques will show you claims are outright wrong, or that sources are legitimately "bad actors" who are trying to deceive you. But even when material is not intentionally deceptive, the moves do something just as important: they re-establish the context that the web so often strips away, allowing for more fruitful engagement with all digital information.

The following organizations are generally regarded as

or celebrities. Here are a few examples:

Respected specialty sites cover niche areas such as climate or celebrities. Here are a few examples:

There are many fact-checking sites outside the U.S. Here is a small sample: