How to write a screenplay - WikiHow

You’ll see that each scene is numbered. And “INT. OFFICE. DAY” indicates that it’s an internal shot, in an office, during the day.

The character speaking the dialogue always appears above their dialogue. And this is indented 3.4cm from the left AND the right. That makes it easy to distinguish the dialogue from the instructions.

If you’re describing action, you write it in present tense. Example: “He walks towards the toilet door.”
Source: How to format a screenplay (Australian Writers' Centre)
Writing a script - Georgetown University Library 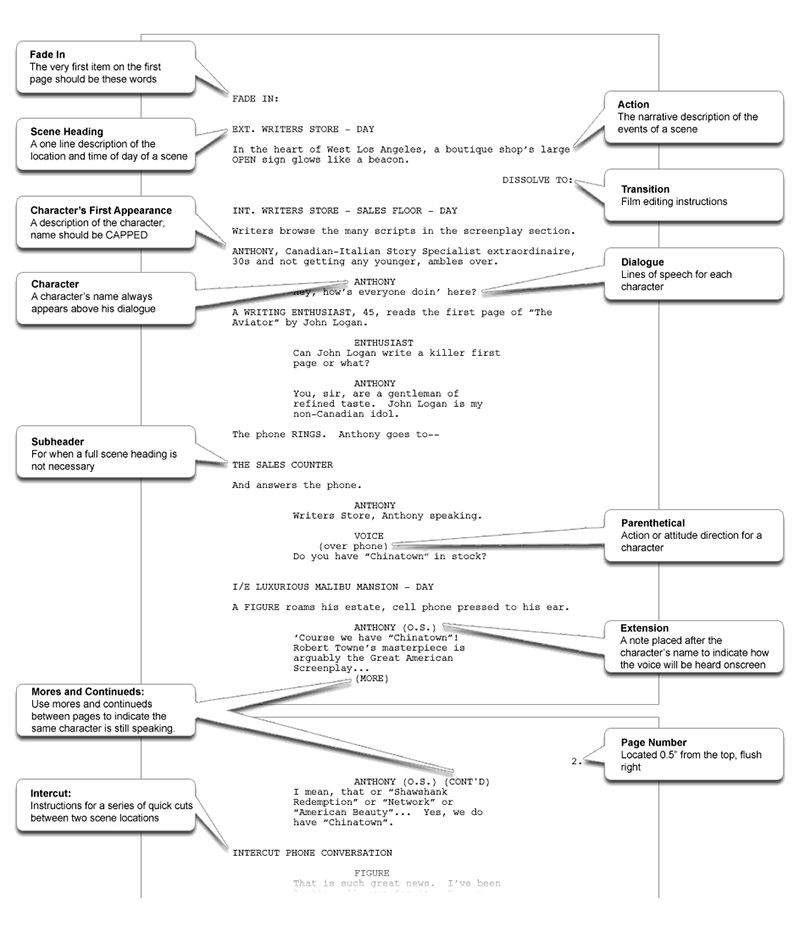 How to write a screenplay (Brighthub)

Basically, screenplays are broken into four main pieces: Character Dialogue, Scene Headings, Names and Scene Action. The purpose of this is to break up your screenplay into scenes, which assists in the flow of the screenplay and helps actors learn individual scenes.

First of all, let’s discuss how you will set up your character dialogue or what the character (the “who" of the scene) is saying. Generally, this is done in one of two ways. Either the character name will be slightly indented or centered over the dialogue. The name is always in all caps. For example, see below:

I want to go out to eat tonight. I don’t feel like cooking.

Dialogue is always single-spaced so that more of it can fit on a page. Unless you’re writing a novel, quotes are not necessary, only the name of the character.

Next, we’re going to move onto the scene headings. These are often referred to as sluglines. The headings tell the “where" of the screenwriting scene or where the action is taking place. For example, see below:

Scene headings go over the location of the scene (FRONT PORCH), time of day (LATE NIGHT) and whether or not the action is taking place inside or outside (EXT for exterior and INT for interior). This helps the director and production crew figure out where they need to set up the action. For example, if INT is used, they may be working on a sound stage or even inside a home.