A straight line is also a curve: Interview with Ron Arad

"3D printing is abused" - Ron Arad from Dezeen on Vimeo.

Arad's career as a designer began with the Rover chair, a leather car seat of a Rover V8 2L anchored on a tubular steel frame.[6] He was Head of Design Products Department at the Royal College of Art from 1997 to 2009.[7][8] Arad designed in 1994 the Bookworm bookshelf, which was still produced in 2011 by the Italian company Kartell.[9]

Arad's work has been described as "scary", considering its "macho concrete and cut metal; tense sheets of tempered steel and guillotine edges".[5]

In 2005, Arad designed chandeliers for the Swarovski crystal company which if one has the number, can display text messages that are sent to it by incorporating light-emitting diodes (LEDs) operated by SMS text messages.[7] He also has had tables that climb walls instead of being centered in the room. Arad's works are often worked into distinctive biomorphic shapes and are created from his medium of choice, steel.[10] He made plans to expand his studio in 2008.[11]

In 2008–09, Arad paired with KENZO to create his first perfume bottle. The bottle was on display in his exhibit No Discipline.[12]

He has also designed the Design Museum Holon together with Bruno Asa, which was opened in Israel in 2010.[13]

In 2010, Arad started his collaboration with New Eye London to design an eyewear collection.

Arad's installation “720 Degrees” opened at the sculpture garden of the Israel Museum in August 2012. It consists of 5,600 silicon rods that form a circle 26 feet above the garden. Visitors view projected images standing inside or outside the structure.[14]

Arad designed the ToHA office complex in Tel Aviv, under construction until 2018.[15] Once completed, it will be the tallest skyscraper in Israel.[15] (Wikipedia) 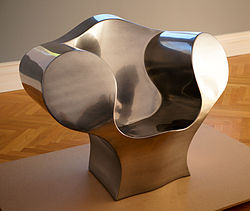