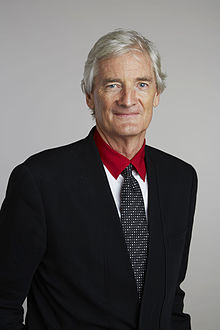 James Dyson at the Royal Society admissions day in London, July 2015
Sir James Dyson OM CBE FRS FREng is a British inventor, industrial designer and founder of the Dyson company. He is best known as the inventor of the Dual Cyclone bagless vacuum cleaner, which works on the principle of cyclonic separation. Wikipedia
Born: 2 May 1947, Cromer, United Kingdom
Net worth: 4.4 billion USD (2017) Forbes
Spouse: Deirdre Hindmarsh (m. 1968)
Awards: Order of Merit (2016), Knight Bachelor (2007), more
Books: Against the Odds, A history of great inventions, The Mammoth Book of Great Inventions (Source: Wikipedia)
Read an interview with James Dyson.
Inside billionaire James Dyson's Reinvention Factory: From vacuums to hairdryers and now batteries.
Inside the dynasty (Financial Times)
Biography and timeline

James' story: What is a design engineer?

Dyson helped design the Sea Truck in 1970 while studying at the Royal College of Art. His first original invention, the Ballbarrow, was a modified version of a wheelbarrow using a ball instead of a wheel. This was featured on the BBC's Tomorrow's World television programme. Dyson stuck with the idea of a ball, which his brother had thought of, inventing the Trolleyball, a trolley that launched boats. He then designed the Wheelboat,[8] which could travel at speeds of 64 kilometres per hour (40 mph) on both land and water.

In the late 1970s, Dyson had the idea of using cyclonic separation to create a vacuum cleaner that would not lose suction as it picked up dirt. He became frustrated with his Hoover Junior's diminishing performance: the dust bag kept becoming clogged with loads of dust thus reducing suction.[9] The cyclone idea came from a sawmill that used cyclone technology (qv. History of Dyson Ltd).[10]

In 2000, Dyson expanded his appliance range to include a washing machine called the ContraRotator, which had two rotating drums moving in opposite directions. The range was decorated in the usual bright Dyson colours, rather than the traditional white, grey or black of most other machines. The item was not a commercial success and is no longer available.[15]

In 2002, Dyson created a realisation of the optical illusions depicted in the lithographs of Dutch artist M. C. Escher. Engineer Derek Phillips was able to accomplish the task after a year of work, creating a water sculpture in which the water appears to flow up to the tops of four ramps arranged in a square, before cascading to the bottom of the next ramp. The creation titled Wrong Garden,[16] was displayed at the Chelsea Flower Show in 2003.[17] The illusion is accomplished with water containing air bubbles pumped through a chamber underneath the transparent glass ramps to a slit at the top from which the bulk of the water cascades down. This makes it appear that the water is flowing up, when actually a small amount of water diverted from the slit at the top flows back down the ramps in a thin layer.  (Read more on Wikipedia)

Read about the Dyson vacuum cleaner 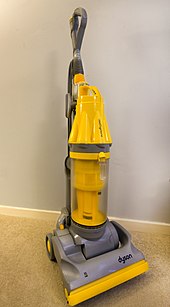 What is a design engineer?