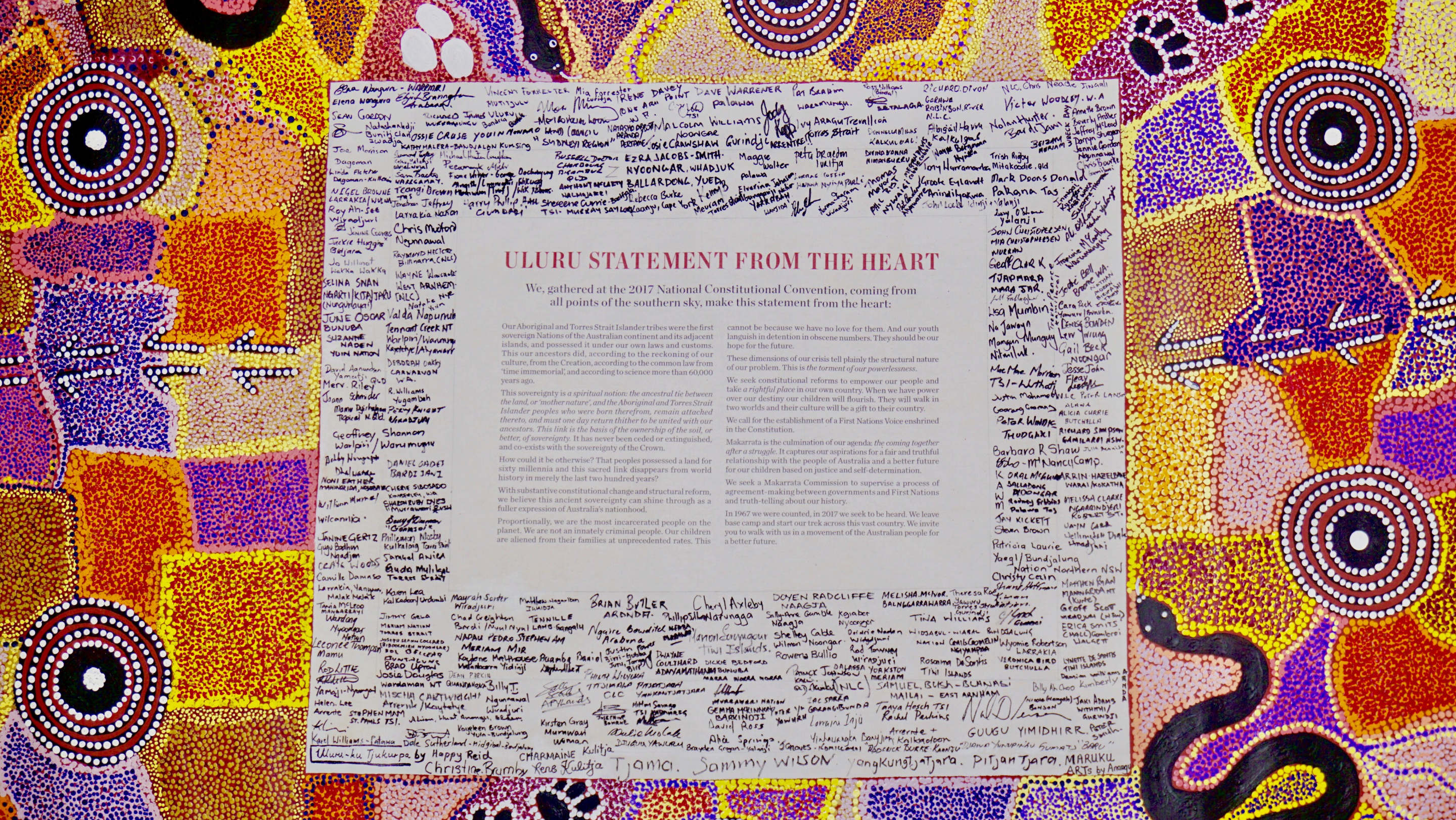 Uluru Statement from the Heart

What is the Uluru Statement from the Heart? What needs to happen next?

It has been five years since hundreds of First Nations leaders gathered at Australia’s red centre to endorse the historic Uluru Statement from the Heart.

Now, with a new prime minister leading a new government, it finally looks as if the changes called for in the Uluru Statement will be acted upon.

As Anthony Albanese claimed victory on May 21, the first words out of his mouth were a message of support for the Statement: “I begin by acknowledging the Traditional Owners of the land on which we meet. I pay my respect to their Elders, past, present and emerging, and on behalf of the Australian Labor Party I commit to the Uluru Statement from the Heart in full,” he said.

But what does the Uluru Statement actually call for? And what can we expect in the first term of a Labor government?

What is the Uluru Statement?

The Uluru Statement from the Heart is a document (above) written and endorsed by hundreds of Indigenous leaders who invite the Australian people to join them in their call for structural and constitutional reforms to improve the lives of Aboriginal and Torres Strait Islander people. Importantly, it is not addressed to the government nor to politicians.

Its 12 paragraphs are simple and direct. It notes that the sovereignty of First Nations people is ongoing and has never been ceded, and asks for the creation of two new institutions: an Indigenous Voice to parliament and a Makarrata Commission to oversee treaty-making and truth-telling.

“We seek constitutional reforms to empower our people and take a rightful place in our own country,” the statement reads. “When we have power over our destiny our children will flourish. They will walk in two worlds and their culture will be a gift to their country.”

The three key reforms the statement calls for can be summarised as Voice, Treaty, and Truth – in that order.

The statement was the culmination of years of work. A Referendum Council, appointed in 2015 by prime minister Malcolm Turnbull and Labor leader Bill Shorten held 12 dialogues (town hall-style meetings) with Indigenous people across the country. It then gathered more than 250 Indigenous delegates for a convention at the “spiritual heart of Australia”, Uluru, a sacred place to the local Anangu Traditional Owners.

It was at this meeting that the statement was endorsed to a standing ovation. Several delegates walked out in protest while the vast majority backed it – a historic consensus, even if not unanimous.

What is an Indigenous Voice?

The statement argues that reforms such as an Indigenous Voice would empower First Nations people to address the “torment of powerlessness” that sees them over-incarcerated and their children alienated from their families at alarming rates.

Several countries already have some kind of Indigenous Voice. Advocates for the Uluru Statement compare the idea to the First Nations parliaments in Norway, Sweden and Finland for the Sami people. In another example, the New Zealand parliament reserves seven of its seats for Maori electorates.

The Uluru Statement doesn’t outline what shape or form a Voice should take, but it does say the body must be enshrined in the Australian Constitution, which would have to happen via a referendum. This would make it difficult for a hostile government to abolish it, as the Howard government did to the Aboriginal and Torres Strait Islander Commission (ATSIC) in 2005.

If enshrined in the Constitution, the Voice could be removed only through a second referendum, which would ultimately leave the decision to the Australian people.

How would a voice work?

The Uluru Statement and the Voice proposal were dismissed by the former Coalition government in 2017 under the leadership of Malcolm Turnbull. In fact, several high-ranking members of that government incorrectly claimed an Indigenous Voice would be a potential “third chamber” of parliament.

Things slowly started to change after the 2019 election, when Ken Wyatt became the first Aboriginal person appointed as Minister for Indigenous Australians. The Coalition still refused to support the Uluru Statement, but the party did warm to the idea of an Indigenous Voice, albeit not one enshrined in the Constitution. Wyatt promised to legislate it through an act of parliament.

Indigenous leaders Marcia Langton and Tom Calma were then appointed in late 2019 to investigate what this Voice might look like. After consultation, they recommended the creation of local and regional Voices that would work with all levels of government, followed by a national Voice that could advise on federal policy and laws.

The local and regional Voice bodies would be relatively flexible so that they could adapt to the needs of different communities, who would be able to determine how many people were involved with their local Voice and how they were appointed (whether by an election or through structures drawn from traditional law and custom, for example).

Langton and Calma’s report said the national Voice should have a more formal structure with two members from each state and territory plus another from the Torres Strait Islands. It also suggested that NSW, Queensland, Western Australia, the Northern Territory and South Australia have an extra member for remote residents, and that there be an extra member for Torres Strait Islander people living on the mainland.

The Coalition promised to legislate 35 local and regional Voice bodies and assigned $31.8 million towards their creation in its final budget. Nothing was included in the forward estimates for a national Voice. However, this process never happened – the Coalition lost the election before it could begin.

Labor, on the other hand, has backed a constitutionally enshrined Voice to parliament since 2017.

What is a Makarrata Commission? And truth-telling?

Makarrata is a Yolngu word meaning “a coming together after a struggle”. That captures the idea of what this commission would seek to do: assist in creating a fair and truthful relationship between Indigenous people and other Australians. It would be in charge of agreement-making between First Nations people and governments. Labor has made it clear it also sees this as a body to oversee treaty-making processes.

There are already treaty processes under way in some jurisdictions to try and fix the unjust relationships that have been created due to colonisation. The Northern Territory and Victoria are two such jurisdictions. The NT Treaty Commissioner has published a discussion paper that details some of the more complex parts of the process. For example, it notes that treaties between First Nations people and colonisers (which would include today’s governments) tend to be different from regular treaties, say, between warring countries. These treaties often contain clauses to provide reparations to make up for historical losses that cannot be fixed, allow limited self-government, and provide financial resources so that communities can become more economically empowered.

The Makarrata Commission would also oversee “truth-telling” activities. Truth-telling refers to a process of sharing historical truths, warts and all, after periods of conflict or severe human rights violations. The idea is that by revealing the full extent of injustices committed against Indigenous people, wider society can fully come to terms with history and move towards true reconciliation.

A truth-telling a process has started in Victoria called the Yoorrook Justice Commission, yoorrook meaning “truth” in the Wemba Wemba/ Wamba Wamba language. The commission is based on similar projects undertaken in Canada and New Zealand as well as in Scandinavia, and is also partially modelled on the Truth and Reconciliation Commission set up by Nelson Mandela in post-apartheid South Africa.

While the Uluru Statement calls for the establishment of a Voice before a Makarrata Commission, incoming Indigenous Affairs Minister Linda Burney says she wants to begin work to create them at the same time, saying a strict sequence isn’t necessary.

What are the next steps?

The day after Albanese began his election victory speech by reaffirming his support for the Uluru Statement, Burney said a referendum to enshrine the Voice in the Constitution could happen as soon as next May.

The leaders of the Uluru Dialogue, a group of both Indigenous and non-Indigenous leaders involved in the statement, have put forward two separate dates they would like to see a referendum held: May 27, 2023, or January 27, 2024.

But before Australians cast their vote in what would be the nation’s first referendum in two decades, there are some things that need to happen.

Albanese has previously avoided committing to a firm timeline, saying that he needs to consult with Indigenous communities first. His government will also need to consider the work done by the previous government to decide whether it was going to proceed with the model that had already been designed.

Members of Albanese’s frontbench have also said they want to secure bipartisan support from the Coalition for constitutional change. This is a tricky proposition given how divisive the issue has been for the Coalition. However, Labor will push ahead with a referendum regardless of whether it has opposition support or not – it would just make a campaign to convince Australians to vote in favour of the changes significantly easier.

The government will need to decide on the exact wording of the changes it wants to make to the Constitution before passing a bill proposing the amendments through parliament. While Burney has noted the Uluru Statement enjoys support from many parts of the community, she acknowledges there must be a unified campaign for change. For any referendum to successfully pass it has to achieve a double majority: more than half of Australians must vote in favour of the change as well as more than half of the voters in four of the six states (the territories aren’t counted).

What are the challenges?

Support for the Uluru Statement is not universal in the Indigenous community. In fact, seven delegates walked out of the national convention in 2017 where the statement was first endorsed because they believed treaties were required immediately, not a referendum.

Meanwhile, the Greens party grabbed headlines during the election campaign because of its stance. It would prefer to create a Truth and Reconciliation Commission, which would essentially have the same job as the Makarrata Commission, before an Indigenous Voice. This would reverse the order of events set out in the Uluru Statement, which urges the creation of a Voice first because it would politically empower First Nations people. However, Greens leader Adam Bandt later clarified that his party would not stand in the way of Labor’s move to hold a referendum in this term of parliament.

Labor may have won the election, but there is still a long road ahead to implement the Uluru Statement from the Heart in full – and with three processes to set in motion, it is likely that it will take more than one term to get the job done.