Frankenstein; or, The Modern Prometheus is a novel written by English author Mary Shelley (1797–1851) that tells the story of Victor Frankenstein, a young scientist who creates a hideous, sapient creature in an unorthodox scientific experiment. Shelley started writing the story when she was 18, and the first edition of the novel was published anonymously in London on 1 January 1818, when she was 20.[2] Her name first appeared on the second edition, published in 1823. (Source: Wikipedia) 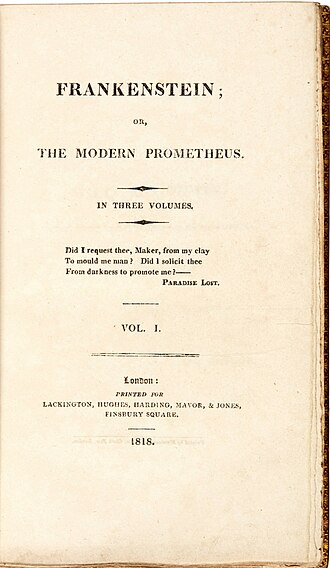 The novel Frankenstein is written in epistolary form, documenting a fictional correspondence between Captain Robert Walton and his sister, Margaret Walton Saville. Walton is a failed writer and captain who sets out to explore the North Pole and expand his scientific knowledge in hopes of achieving fame. During the voyage, the crew spots a dog sled driven by a gigantic figure. A few hours later, the crew rescues a nearly frozen and emaciated man named Victor Frankenstein. Frankenstein has been in pursuit of the gigantic man observed by Walton's crew. Frankenstein starts to recover from his exertion; he sees in Walton the same obsession that has destroyed him, and recounts a story of his life's miseries to Walton as a warning. The recounted story serves as the frame for Frankenstein's narrative. (Source: Wikipedia)

Victor begins by telling of his childhood. Born in Naples, Italy, into a wealthy Genevan family, Victor and his brothers, Ernest and William, all three being sons of Alphonse Frankenstein by the former Caroline Beaufort, are encouraged to seek a greater understanding of the world through chemistry. As a young boy, Victor is obsessed with studying outdated theories that focus on simulating natural wonders. When Victor is five years old, his parents adopt Elizabeth Lavenza, the orphaned daughter of an expropriated Italian nobleman, with whom Victor (allegedly) later falls in love. During this period, Victor's parents, Alphonse and Caroline, take in yet another orphan, Justine Moritz, who becomes William's nanny. (Read the rest on Wikipedia)

Intelligent and articulate, the Creature relates his first days of life, living alone in the wilderness and finding that people were afraid of and hated him due to his appearance, which led him to fear and hide from them. While living in an abandoned structure connected to a cottage, he grew fond of the poor family living there, and discreetly collected firewood for them. Secretly living among the family for months, the Creature learned to speak by listening to them and he taught himself to read after discovering a lost satchel of books in the woods. When he saw his reflection in a pool, he realized his physical appearance was hideous, and it terrified him as it terrifies normal humans. Nevertheless, he approached the family in hopes of becoming their friend. Initially he was able to befriend the blind father figure of the family, but the rest of them were frightened and they all fled their home, resulting in the Creature leaving, disappointed. He traveled to Victor's family estate using details from Victor's journal, murdered William, and framed Justine. (Read the rest on Wikipedia) 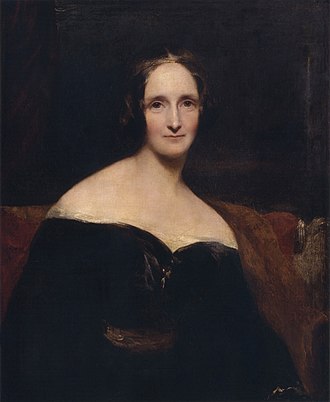 Mary Shelley had a tragic life from the beginning. Shelley's mother, Mary Wollstonecraft, died from infection shortly after giving birth to her. Shelley grew a close attachment to her father having never known her mother. Her father, William Godwin, hired a nurse briefly to care for her and her half sister before he ended up remarrying. Shelley's stepmother did not like the close bond she had with her father, which caused friction and Godwin to then favor his other two daughters and sons.

Her father was a famous author of the time and her education was of great importance, though not formal. Shelley grew up surrounded by her father's friends, writers and persons of political importance, that gathered often at the family home. This inspired her authorship at an early age. Shelley met Percy Bysshe Shelley, who later became her husband, at the age of sixteen while he was visiting with her father. Godwin did not agree with the relationship of his daughter to an older, married but separated man, so they fled to France along with her stepsister, Claire Clairmont. Later, Shelley gave birth and lost their first child. Over eight years she would endure a similar pattern of pregnancy and loss, one hemorrhaging occurring until Percy placed her upon ice to cease the bleeding.[11]

Mary and Percy's trip with Claire to visit her lover Lord Byron, in Geneva during the summer of 1816, began the friendship amongst the two couples in which Byron suggested they have a competition of writing the best ghost story. Historians suggest an affair occurred too, even that paternity of one Shelley child may have been a Byron.[11] Mary was eighteen years old when she won the contest with her creation of Frankenstein.[12][13] (Read the rest on Wikipedia)

Shelley was heavily influenced by both of her parents works. Her father was famous for Enquiry Concerning Political Justice and her mother famous for A Vindication of the Rights of Woman. Her father's novels also influenced her writing of Frankenstein. These novels included Things as They Are; or, The Adventures of Caleb Williams, St. Leon, and Fleetwood. All of these books were set in Switzerland, similar to the setting in Frankenstein. Some major themes of social affections and the renewal of life that appear in Shelley's novel stem from these works she had in her possession. Other literary influences that appear in Frankenstein are Pygmalion (play) and Ovid with the use of an individual lacking intelligence and those individuals identifying the problems with society. Ovid also inspires the use of Prometheus in Shelley's title.[14]

Percy and Byron's discussion on life and death surrounded many scientific geniuses of the time. They discussed ideas from Erasmus Darwin and the experiments from Luigi Galvani. Mary joined these conversations and the ideas of Darwin and Galvani were both present in her novel. The horrors of not being able to write a story for the contest and her hard life also influenced the themes within Frankenstein. The themes of loss, guilt, and the consequences of defying nature present in the novel all developed from Mary Shelley's own life. The loss of her mother, the relationship with her father, and the death of her first child created the monster and his separation from parental guidance. In a 1965 issue of The Journal of Religion and Health a psychologist proposed guilt stemmed from her not feeling good enough for Percy because of the loss of their child.[13] (Source: Wikipedia)