Key facts about North and South

Key Facts about North and South

Victorian Britain: The rise of technology and industry

Realism: Professor John Mullan explores the key features of realism and the different ways in which Victorian writers used them. 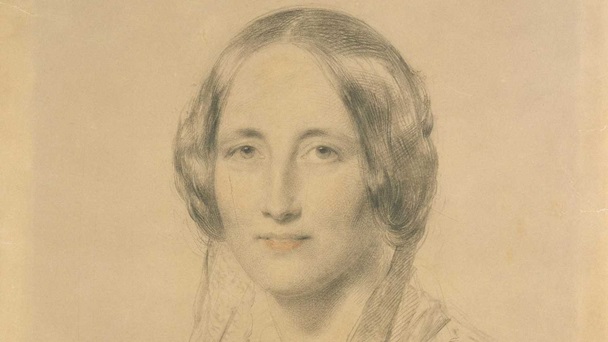 After her cousin Edith Shaw’s wedding, eighteen-year-old Margaret Hale returns from London, her home for the past decade, to Helstone, the small Southern England village where her father, Richard Hale, and her mother, Maria Hale, still live. Soon after Margaret’s longed-for homecoming, however, Mr. Hale confides that, due to unspecified religious doubts, he must no longer be a minister in the Church of England; the entire family must therefore move to Milton, a Northern industrial city, where Mr. Hale will work as a private tutor.

Soon after their arrival in smoky Milton, Margaret meets John Thornton, a young, successful cotton-mill owner who will be her father’s primary pupil. Margaret finds him off-putting and “not quite a gentleman.” She especially dislikes the antagonistic way he speaks about employers and workers, despite Thornton’s own humble background. Thornton, meanwhile, admires Margaret’s regal beauty, but thinks her proud.

While walking through the streets of Milton, Margaret befriends a working-class father and daughter, Nicholas Higgins and Bessy Higgins, and begins visiting Bessy often. Bessy, who is the same age as Margaret, is dying of a respiratory illness she contracted after years of working in a cotton mill. Margaret and Bessy often discuss Bessy’s yearning for heaven and her dread of the upheaval stirred by strikes, and Margaret comforts Bessy in her illness. Since their move to Milton, Mrs. Hale is also sickened by the smoky atmosphere, and she soon receives a fatal diagnosis. Margaret voluntarily bears the burden of nursing her mother, as well as shielding her father from the news at first.

During his visits to the Hales’, Thornton, Mr. Hale, and Margaret have numerous discussions about the cotton industry and class relations in Milton. Margaret argues that the antipathy between masters and workers is due to too little friendship between the groups, while Thornton maintains that she overestimates his personal influence over his workers. While Thornton shows genuine concern for individuals—such as when he brings a fruit basket to Mrs. Hale—Margaret can’t reconcile this with his cold application of economic theories.

Thornton’s workers participate in a city-wide labor strike, protesting a reduction in wages. Thornton, arguing that the strikers are ignorant fools who don’t understand the laws of commerce, brings in strikebreakers from Ireland to keep work going. Higgins is on the millworker union’s strike committee. He frequently argues with his neighbor, John Boucher, a downtrodden laborer who’s struggling to support many children. Boucher argues that the union is the worst tyrant of all, because it forces people to starve to death rather than oppose the union, and it ostracizes anyone who does.

When Mrs. Hale’s condition takes a downturn, Margaret walks to the Thorntons’ to ask for a waterbed that will make her mother more comfortable. She notices an ominous murmur throughout the town, and by the time she reaches Marlborough Mills, the crowds, angry about the imported Irish workers, are preparing to break down the factory gate. Margaret begs Thornton to speak to the crowds “as if they were human beings.” When he faces them, however, he is defiant, and some men begin to throw clogs at him. Margaret instinctively embraces Thornton to protect him—taking for granted that no one will harm a woman—and is briefly knocked unconscious when a pebble grazes her face. The rioters disperse, and as he carries her to safety, Thornton confesses his love to the unconscious Margaret. The next day, Thornton visits and proposes to Margaret. Margaret is appalled that Thornton saw her protective instinct as anything personal between the two of them, and she haughtily refuses him.

Mrs. Hale, meanwhile, is desperate to see her firstborn, Frederick, before she dies. Frederick has been living in exile in Spain since he helped lead a mutiny against a tyrannical naval captain years ago; if he returns to England, he risks capture and hanging. Margaret accordingly sends him a letter, asking him to risk the journey to England.

Soon, Bessy dies; one of her last requests is that her father be kept from drinking. When Margaret visits the family, she blocks a grief-stricken Higgins from going straight to the gin-shop, inviting him home for tea with her father instead. Mr. Hale and Higgins strike up an unlikely friendship. Higgins explains that the riot brought the strike to an end, and he doesn’t know where he can find work.

Not long after, Frederick arrives. The Hales savor a brief reunion before Mrs. Hale’s condition worsens, and she dies. While her father and brother are crippled with grief, Margaret takes responsibility for comforting them and arranging the funeral. Before the funeral, Frederick must flee for Spain, and Margaret accompanies him to the train station. Thornton rides by and sees the two together, imagining Frederick must be Margaret’s lover. While at the station, a former shipmate of Frederick’s, Leonards, recognizes and drunkenly threatens Frederick, who pushes Leonards off the platform.

A few days later, a police inspector informs Margaret that Leonards died as a result of his fall, and that she is rumored to have witnessed the scuffle. Margaret says she was not there, but is ashamed to have lied out of fear for Frederick’s safety. Thornton, who’s a town magistrate, hears about the case and decides to stop the inquest in order to keep Margaret from public shame. Margaret feels disgraced by Thornton’s knowledge of her lie.

The Hales soon learn that Boucher has committed suicide. Later, Higgins tells them he feels responsible for driving Boucher to despair; he wants to take care of the orphaned children, but he’s still unemployed. Margaret suggests that he approach Thornton. Thornton rebuffs Higgins at first, but after finding out Higgins is sincere, he comes in person to apologize and invite Higgins to work for him. They slowly gain respect for one another and exchange ideas.

When Mr. Hale goes to visit his friend Mr. Bell in Oxford, Margaret finally has the leisure to grieve and rest from her incessant caring for others. While they are apart, Mr. Hale dies suddenly. A heartbroken Margaret bids goodbye to her Milton friends and returns to London to live with her relatives. Margaret quickly finds London life even more superficial than before.

With Mr. Bell, Margaret visits Helstone for the first time since she left it two years ago. Margaret is grieved by how much is different there—landscape, people, and parsonage—but soon reconciles herself to the truth that everything changes, including herself. Mr. Bell then dies of a stroke, and Margaret inherits his substantial fortune. She decides she must “take her life into her own hands” and begins planning to use her money to help others.

Back in Milton, Thornton’s mill is failing, due to aftereffects of the strike and his own overambition. He refuses to engage in risky speculations and ensures that everyone he owes is paid. In the meantime, Higgins mentions Margaret’s brother, and Thornton finally understands what he saw at the train station. Some time later, Margaret and Thornton are reunited at a dinner in London. Margaret hears about Thornton’s failure, as well as his newfound ambition to engage with workers “beyond the mere cash-nexus,” by involving them closely in both the planning and execution of his ideas. He hopes this acquaintance will lessen the bitterness of any future strikes. When Margaret hears Thornton’s new outlook, she draws up a business proposal whereby some of her money can be used to save Marlborough Mills. She and Thornton acknowledge their love for one another and are united at last. (Source: Litcharts) 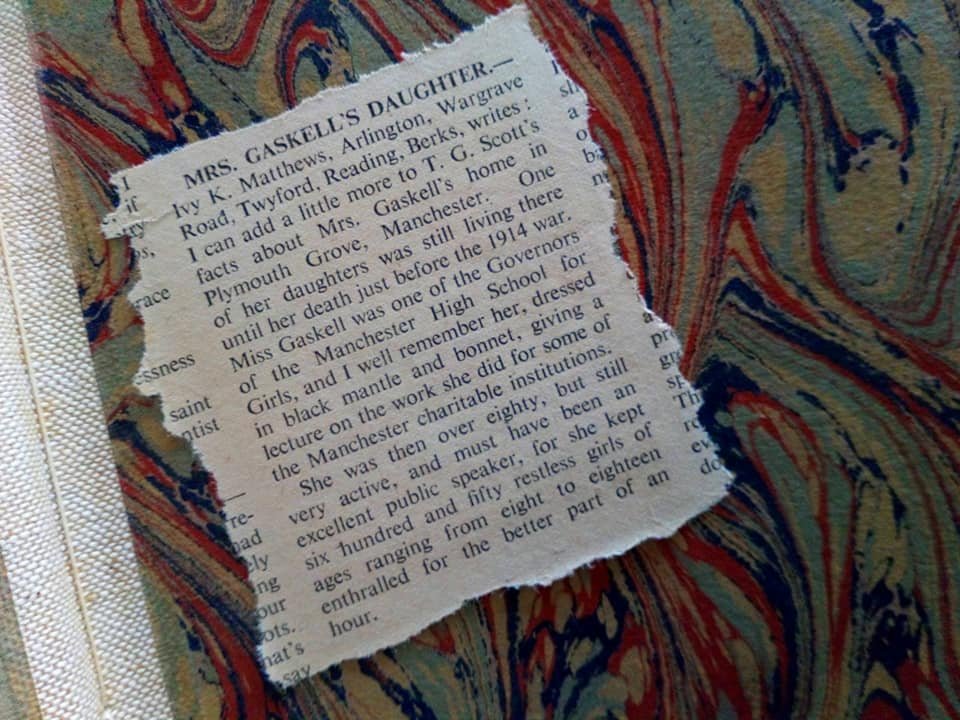 This old newspaper clipping remembers Meta Gaskell when she was still living in Gaskells House.