What is the anti-globalisation movement? 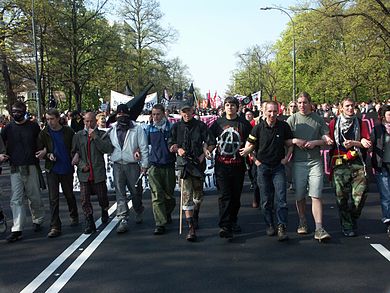 Thousands of people gathered for a demonstration in Warsaw, the capital of Poland, as the country prepared to enter the European Union in 2004. (Photo source)

Participants base their criticisms on a number of related ideas.[4] What is shared is that participants oppose large, multinational corporations having unregulated political power, exercised through trade agreements and deregulated financial markets. Specifically, corporations are accused of seeking to maximize profit at the expense of work safety conditions and standards, labour hiring and compensation standards, environmental conservation principles, and the integrity of national legislative authority, independence and sovereignty. As of January 2012, some commentators have characterized changes in the global economy as "turbo-capitalism" (Edward Luttwak), "market fundamentalism" (George Soros), "casino capitalism" (Susan Strange),[5] and as "McWorld" (Benjamin Barber).

Many anti-globalization activists do not oppose globalization in general and call for forms of global integration that better provide democratic representation, advancement of human rights, fair trade and sustainable development and therefore feel the term "anti-globalization" is misleading.[6][7][8] (Read more on Wikipedia)

Constructing the anti-globalisation movement
G8-Summit protests in Germany: Against globalisation and its non-emancipatory responses - Rob Augman