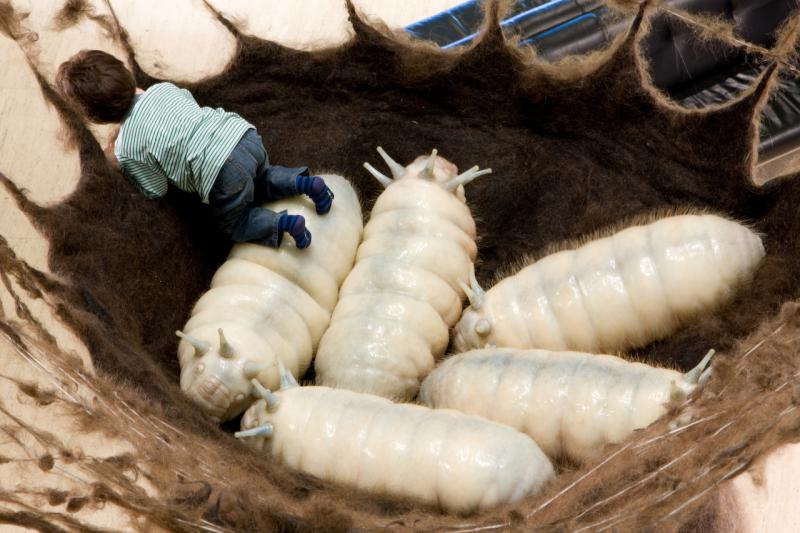 This large scale work (it weighs 100 kgs!) looks real, but it’s not something we would find in our real world. The artist
imagines different worlds in which we will recognise some things, but not others.
Similar to other sculptures in the exhibition, aloft is constructed from a wide range of materials including fibreglass,
felted human hair and wool, steel cable, silicon, horse hair, clothing, and electronic motors.
here a young boy is peeping over the edge of a large, bulging egg sack, suspended from the centre of a web. the
boy seems curious and untroubled – comfortable as he looks at the world beneath him, relaxed in his surroundings,
however strange these may seem to us.
this hairy egg sack has been fashioned from human hair. Many hairdressers and volunteers in Melbourne were
involved in collecting and sorting the quarter of a tonne of hair required for the work! Human hair has also been used
in newborn, the long awaited, the young family, and several other works.

Questions and things to consider:

Does this strange organic form seem at odds with its environment?

This work refers to the idea that it is the right of humans to go into the environment of other species and take
(or destroy) what they want.

In this work we see a little girl on the floor playing with strange flesh-like lumps, of various shapes. These lumps look
like living tissue, and show human characteristics such as mottled skin, fine hair, and veins. the title of the work suggests
that these lumps were created in a laboratory from stem cells. these are cells that are able to be transformed into
any other kind of cell in the human body, such as skin, heart, kidney, lung, or brain cells. they are very important for
medical research. they offer the potential of cures for diseases, and a life free of sickness.
the bio-technologies that are of interest to the artist were unimaginable even twenty years ago, but are now widely
used. With advances in medical research and technologies, the possibilities suggested by stem cells are limitless.
this work comments on how new technologies are absorbed, and how they become quickly normalised in
contemporary society. it also presents a scenario where what we might receive from these technologies might not be
what we expect. Would this necessarily be a bad thing?
Curator Jane Messenger comments: ‘the ability to grow human bodily matter in a laboratory is changing how we
think about the body and its limitations, as component parts can be manufactured, repaired and replaced in a way
analogous to a car being serviced’.
If parts of our bodies can be replaced, will we think differently about life and death?

In Mary Shelley’s novel Frankenstein (first published in 1818) ‘human’ life is created in a laboratory. But the
creation is deformed, and so is rejected, experiences only misery and despair, and finally turns against his creator.
How might this centuries-old scenario have implications today.

In Protein Lattice, Subset Red - Portrait, a professional fashion model poses while playing idly with a digitally generated hairless rat that has a life-size human ear growing from its back. We wonder whether the rat represents the pets of the future or a new fashion accessory. The rat actually refers to a real laboratory experiment in which a rat was used as a host for 'growing' an organ, in this case an ear, that was eventually used in plastic surgery. The commercial aspect of both the rat and the fashion model was emphasised when Piccinini enlarged the image onto an advertising billboard on a city building. Piccinini's argument is that both the mutant rat and the fashion photographs are digitally enhanced to remove the slightest imperfection.

This work was inspired by scientists’ plans to begin breeding genetically-modified pigs to provide replacement
organs and insulin-producing cells for humans, thus alleviating shortages of human organs for transplant, and treating
diabetes. the work is not about whether such practices are right or wrong, but rather whether society will accept the
outcomes of these developments.
The artist has commented: ‘For me, the young family is about the ethical implications of creating new life to serve
humans, and also about the interaction between emotion and rationality when thinking about these “creation” issues.’
This young family has been created by ‘mixing’ together two or more genetically different animals. They are chimeras.
What animals are you reminded of when you look closely? The mother is shown suckling two babies. She seems
exhausted and sad. her gaze is vacant. the playful pup is in a pose very like one in which babies are often seen, lying
on their backs, playing with their toes. is the artist perhaps suggesting that there is not a great distance between
animals and humans? Despite the fact that these are creatures imagined by the artist, the young family looks very real.

• The artist has commented:
i am interested in the kind of ways that we look at the many ethical issues that surround medical technologies.
there are two kinds of people who are thinking about these issues; those who are objective observers and those
that are actually affected by the issues, such as somebody who has a family member who is affected by a disease.
these are two different viewpoints…
Public Lecture – Tokyo Art University 2003
How does this work make you feel about advancements in medical technology?
• What is the nature of our relationship with animals? We use animals as ‘machines’ that produce eggs, milk, meat
and now, body parts for humans. Are we exploiting animals for our own gain? Have scientists over-stepped the
mark? What are your views?

When a platypus specimen from australia first reached London in 1799, it was believed to be a hoax because experts
could not make sense of a creature with a duckbill, webbed feet and beaver tail. it seemed an impossibility.
in one of Piccinini’s most recent works, Eulogy, the creature cradled in a man’s hands appears to be another impossibility,
one of the artist’s chimeras. But it is in fact a replica of a highly-evolved fish, whose flesh is a gelatinous mass that allows
it to survive at depths of high pressure. the blob fish is now facing extinction however, due to deep-sea fishing. in this
work, Piccinini reminds us that evolution is both complex and fragile.
in her works Piccinini alerts us to the richness and magnificence of biodiversity, also demonstrating how our actions
have a direct and immediate effect on the world in which we live.
in Eulogy, the artist draws our attention to the weird and the wonderful in nature. We understand that her hybrid
creatures, such as the Bottom feeder (designed with specialist functions to clean our environment) no longer seem so
remote or improbable.

• What was your initial reaction on seeing the blob fish? Did it seem real, or something imagined by the artist?
• The production of Piccinini’s work requires a studio of technicians who are credited for the modelling, rendering,
editing, video and production work that they carry out. the studio is called drome.
‘I tell people straight out that I conceive the work and then bring together the pieces. How do people perceive
that? I don’t know, and it doesn’t interest me. If I didn’t have great people working on the projects, it wouldn’t
work. i don’t want the ideas to be limited by what i can physically do. the ideas come first.’
discuss the materials and processes that have been used by the technicians at the drome studio to create this
work.
• The artist’s style has been described as hyperreal. Later, research this term, and also the works produced by artists
ron Mueck, and duane hanson.
• View Hanson’s work Woman with a laundry basket in gallery 16. compare and contrast the use of materials and
processes in Piccinini’s Eulogy with this work by Hanson.

In this sculpture we see two boys who look like twins. They are focused on a hand-held computer game – ‘Game
Boy’. But on closer look it seems that they are not boys at all. they have loose, blemished skin, wrinkled eyes – and
ear hair! These are characteristics of a much older person. The work draws on Piccinini’s interest in evolution, genetic
engineering, and technology.
the boys have been cloned. the idea for this work came from developments in the cloning of genes. Piccinini is
interested in the promise of genetic engineering, but acknowledges in her work that it can have bad outcomes as well
as good. What will become of the unexpected or undesirable outcomes, Piccinini has asked? ‘Will we love the failures
of new technologies as much as we love the successes?’
the first cloned mammal was dolly, a sheep cloned from a mammary cell of an adult ewe, in Scotland in 1996. there
was a good deal of interest in this development, and much controversy. dolly aged prematurely and did not live
as long as expected, and this was possibly because she was cloned from a ewe already six years old. the unnatural
environment in which dolly was raised may also have contributed to her early death.
in this work Piccinini is imagining future possibilities, although perhaps the possibilities are actually not too distant. it
is interesting that the boys do not seem concerned about their situation. they are ageing prematurely, but they look
quite content, absorbed in their game, just as we would expect young boys to be.

• What do you think the artist has intended by using the word ‘advanced’ in the title?

This sculpture may at first seem confronting and disturbing: it’s an unusual sight. a young boy, seated on a bench
(notice that his feet don’t quite reach the ground) is curled over the shoulder of a large, strange-looking, very fleshy
creature (one of the artist’s ‘hybrids’?) who looks part gentle old grandmother, and part Dugong!
the two figures are apparently asleep, and as we look closely we see that they look very relaxed snuggled up together.
There is something tender about their relationship – but something unexpected also. In the ‘usual’ order of things, we
would expect to see the older being (whether human or animal) caring for the younger, but in this work the order
seems to be reversed. Who is doing the caring for, or protecting, here? Look at the position of the boy’s hands for a
clue.
is the artist looking forward to a time when we are all able to embrace, or at least be comfortable with, the different
or unusual – and to co-exist? Children, of course, are best at accommodating difference, and this may be why Piccinini
so often includes children in her works. Do you think trust and innocence go together?

‘Piccinini creates extraordinary sympathy between two lives that are united by the smallest of genetic similarities
and divided by much more’.
(J. Engberg: Patricia Piccinini’s Uprising revolution, exhibition catalogue essay, Tasmanian Museum and Art Gallery, Hobart, 2009)
• Discuss the ways in which Piccinini has achieved this suggestion of sympathy or ‘togetherness’ in the long awaited.
• Caring and nurturing are common themes in Piccinini’s work. Compare and contrast other works in the
exhibition which embrace these these themes.