Das schöne Mädchen is a photomontage piece that was done in 1919-1920 and the title translates in English to The Beautiful Girl. This piece is mixing technology and females together. The piece contains many different pieces and objects which makes it hard to fully analyze the photomontage. There is a woman in the middle of the photo who is dressed in a bathing suit sitting on a girder or a beam. The woman has a light bulb for a head and is holding what looks like a sun umbrella. Behind this woman is a large red-tinted advertisement that has a woman’s large hair-do on top of it. In the book Cut with the Kitchen Knife, this collaged woman figure was described as “she is part human, part machine, part commodity.” In the upper right corner of the piece, there is a large hand holding a clock and a woman’s head peeking out. In the lower left hand corner there is a tire, with what seems to be a man without his head inside the tire. The color scheme includes some black and white pieces along with red and orange. There are circle BMW advertisements surrounding the photo that add checkered colors of blue and white,  and red writing on the black background around the circles. Similar to the first piece, this photomontage includes a reference to the Dada movement through the woman in the upper right corner who has one cat eye that is larger than her regular eye. This larger cat eye represents a monocle which became Höch’s sign for a Dadaist. A good description of this piece that was given by the book Cut with the Kitchen Knife, is “a portrait of a modern woman defined by signs of femininity, technology, media, and advertising” (Lavin). (Source) 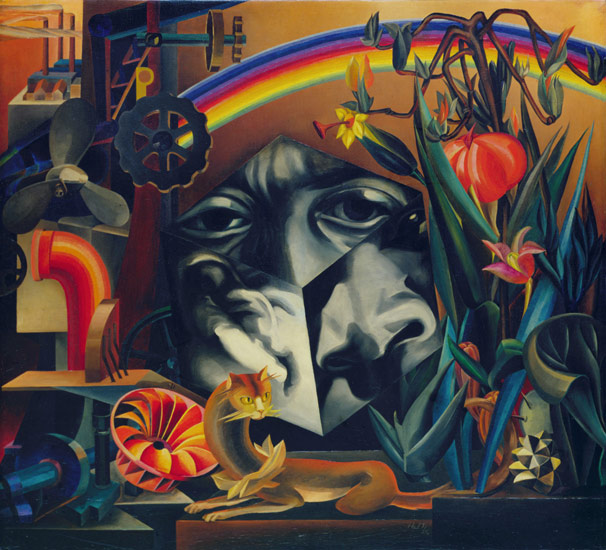