Cherry Alexandra Hood, (born 11 September 1950) the eldest daughter of Max and Helen Hood.She attained a Master of Visual Art at Sydney College of the Arts, University of Sydney in 2000. Her thesis investigated gender politics in art and Culture, cultural mores and taboos surrounding the representation of the male body. Hood had countless solo and group shows while at university in artist-run spaces and is now represented and shows regularly At Tim Olsen Gallery in Sydney, Heiser Gallery in Brisbane, Arc One Gallery in Melbourne. Her works have been collected by most major institutions in Australia and many corporate and private collections. Hood has had solo shows in New York, Los Angeles, San Francisco, Toronto and Vancouver where she is represented by Diane Farris Gallery. Hood works in the unlikely medium of Watercolor to produce her oversized portraits, which are most frequently anonymous composite and not any actual person. She was an Archibald Prize finalist in 2001 with her water colour of art lecturer Matthÿs Gerber and in 2010 with her portrait of Michael Zavros. (Source: Wikipedia)

Read more about Cherry Hood's life on her website. It was a picture of acclaimed young Australian pianist Simon Tedeschi that first caught Cherry Hood's eye. She went to one of his concerts, at the Art Gallery of New South Wales, and then asked him to sit for her.

Seyden - by Sydney artist Cherry Hood is Aitken Hill's most controversial piece to date. Confronting, haunting yet seductively beautiful, the compelling gaze of her young subject creates an existential uncertainty as he confronts the viewer. It is also interesting to note that - almost exclusively - Hood uses watercolour paint to realize an uncanny melting effect in her works. Hood is well known for winning the 2002 Archibald prize and the Kedumba Drawing award. (Source) 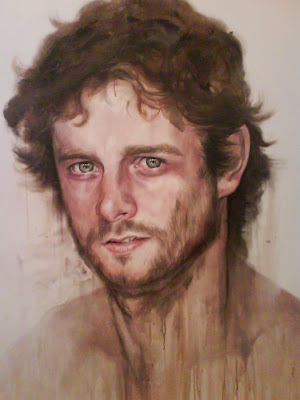