Recommended websites for research about 'Bauhaus'

The Bauhaus, named after a German word meaning "house of building", was founded in 1919 in Weimar, Germany by the architect Walter Gropius. In 1915 he had taken over the Grand-Ducal Saxon School of Arts and Crafts, and it was through the merger of this institution four years later with the Weimar Academy of Fine Art that the radical new design school was formed. In conceptual terms, the Bauhaus emerged out of late-19th-century desires to reunite fine and applied art, to push back against the mechanization of creativity, and to reform education. (Source: The Art Story)

During the turbulent and often dangerous years of World War II, many of the key figures of the Bauhaus emigrated to the United States, where their work and their teaching philosophies influenced generations of young architects and designers. Breuer and Gropius taught at Harvard. Josef and Anni Albers taught at Black Mountain College, and later Josef taught at Yale. Moholy-Nagy established the New Bauhaus in Chicago in 1937. Mies van der Rohe designed the campus and taught at the Illinois Institute of Technology. (Source: The Met Museum)

Beginning in the mid-19th century, reformers led by the English designer William Morris had sought to bridge the same division by emphasizing high-quality handicrafts in combination with design appropriate to its purpose. By the last decade of that century, these efforts had led to the Arts and Crafts movement. While extending the Arts and Crafts attentiveness to good design for every aspect of daily living, the forward-looking Bauhaus rejected the Arts and Crafts emphasis on individually executed luxury objects. Realizing that machine production had to be the precondition of design if that effort was to have any impact in the 20th century, Gropius directed the school’s design efforts toward mass manufacture. On the example of Gropius’s ideal, modern designers have since thought in terms of producing functional and aesthetically pleasing objects for mass society rather than individual items for a wealthy elite. (Source: Britannica) 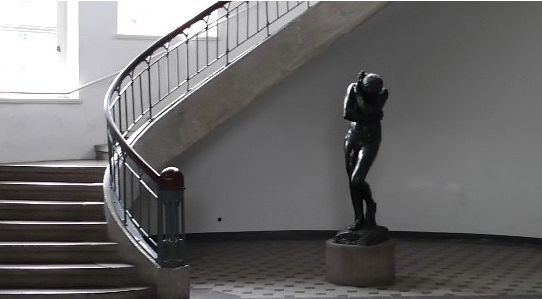 Bauhaus: Design in a nutshell

The Bauhaus was founded in 1919 in the city of Weimar by German architect Walter Gropius (1883–1969). Its core objective was a radical concept: to reimagine the material world to reflect the unity of all the arts. Gropius explained this vision for a union of art and design in the Proclamation of the Bauhaus (1919), which described a utopian craft guild combining architecture, sculpture, and painting into a single creative expression. Gropius developed a craft-based curriculum that would turn out artisans and designers capable of creating useful and beautiful objects appropriate to this new system of living.