Geometric patterns make up one of the three nonfigural types of decoration in Islamic art, which also include calligraphy and vegetal patterns. Whether isolated or used in combination with nonfigural ornamentation or figural representation, geometric patterns are popularly associated with Islamic art, largely due to their aniconic quality. These abstract designs not only adorn the surfaces of monumental Islamic architecture but also function as the major decorative element on a vast array of objects of all types. While geometric ornamentation may have reached a pinnacle in the Islamic world, the sources for both the shapes and the intricate patterns already existed in late antiquity among the Greeks, Romans, and Sasanians in Iran. Islamic artists appropriated key elements from the classical tradition, then complicated and elaborated upon them in order to invent a new form of decoration that stressed the importance of unity and order. The significant intellectual contributions of Islamic mathematicians,astronomers, and scientists were essential to the creation of this unique new style. 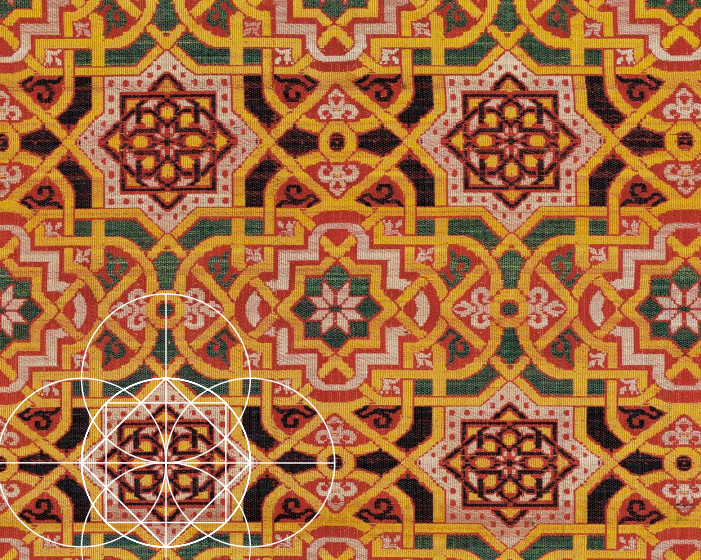 Islamic patterns. Metropolitan Museum of Art. Dado panel, first half of 15th century; Mamluk, Egypt. Polychrome marble mosaic. The patterns represent god. It is interesting the math that goes into making these patterns, it is not evenly balanced or correct although it appears to tesselate. This creates the illusion of a static pattern. Because the pattern is not perfectly balanced each artist is allowed to make up his or her solutions to the pattern. The imperfections in the math allow the viewer to be taken on a journey when viewing the wall. (Source)

Vegetal patterns employed alone or in combination with the other major types of ornament—calligraphy, geometric pattern, and figural representation—adorn a vast number of buildings, manuscripts, objects, and textiles, produced throughout the Islamic world. Unlike calligraphy, whose increasingly popular use as ornament in the early Islamic Arab lands represented a new development, vegetal patterns and the motifs they incorporate were drawn from existing traditions of Byzantine culture in the eastern Mediterranean and Sasanian Iran.

The early centuries of the Islamic era saw the initial adoption of seminaturalistic pre-Islamic motifs and patterns, followed by widespread and highly diverse experimentation adapting these forms to suit the aesthetic interests and tastes of the new Muslim patrons. It was not until the medieval period (tenth–twelfth centuries) that a highly abstract and fully developed Islamic style emerged, featuring that most original and ubiquitous pattern often known as "arabesque." This term was coined in the early nineteenth century following Napoleon's famed expedition in Egypt, which contributed so much to the phenomenon of Orientalism in Europe and later in the United States. Arabesque simply means "in the Arab fashion" in French, and few scholars of Islamic art use it today.

With the Mongol invasion of western Asia in the thirteenth century and the establishment of a Mongol court in Iran in the thirteenth and fourteenth centuries, numerous Chinese motifs and patterns were adopted, though sometimes in markedly revised form. This period saw many transformations in the decorative language of Islamic art that would endure for centuries. In sixteenth-century Europe, first in Italy and then in the north, Islamic-style vegetal patterns were developed. In the sixteenth- and seventeenth-century empires of the Ottomans, Safavids, and Mughals (present-day Turkey, Iran, and India), complicated versions of established patterns were utilized, sometimes incorporating a new interest in naturalistic-looking flowers or blossoms. With the exception of the garden and its usual reference to paradise, vegetal motifs and patterns in Islamic art are largely devoid of symbolic meaning.

Connections between art and mathematics

Connections between art and mathematics.

The nature of Islamic art

The nature of Islamic art (The Metropolitan Museum of Art)

Just as the religion of Islam embodies a way of life and serves as a cohesive force among ethnically and culturally diverse peoples, the art produced by and for Muslim societies has basic identifying and unifying characteristics. Perhaps the most salient of these is the predilection for all-over surface decoration. The four basic components of Islamic ornament are calligraphy, vegetal patterns,geometric patterns, and figural representation. (Source)