By Nick Toscano and Mike Foley

Australia’s power generators will urge state and territory governments against splintering the east coast electricity market by adopting separate schemes to drive investments into projects that shore up the troubled grid.

A key proposal is a so-called “capacity mechanism”, which would reward power assets for being on standby to support renewable energy through all weather conditions. But industry and large power users are warning about the risk of rules varying between states, which they say will add cost and complexity.

Australian Energy Council chief executive Sarah McNamara, representing some of the country’s largest power suppliers including AGL, Origin and EnergyAustralia, indicated the group would prepare a submission to the Energy Security Board (ESB) to argue for a nationally consistent approach to any capacity mechanism, instead of permitting states and territories to select their own preferred fuel sources.

“The Australian Energy Council supports a national approach to market design as this is the best way to ensure the energy transition will work for all consumers,” McNamara told The Age and The Sydney Morning Herald.

“We look forward to providing a detailed response to the ESB and contributing to the discussion on the best form of a mechanism.”

Bowen and the ESB say it may be left up to states to decide whether they wanted to include existing coal- or gas-fired generators in their jurisdictions’ schemes, or only target clean energy projects such as big batteries and pumped hydro.

Victoria has said it will not back a reform that is designed to make payments to coal and gas. NSW is open to gas but not coal, while Queensland has indicated it would support payments to both gas and coal-fired plants.

“We have always been clear that a capacity market operating in Victoria would make payments to zero emissions technologies and not fossil fuels,” the Victorian Energy Minister Lily D’Ambrosio said earlier this week.

Sceptics of the proposed reform, including environmental activist groups and the federal Greens, fear the policy will be designed to favour existing fossil fuel generators, dubbing the proposal “coal keeper”.

Greens leader Adam Bandt said on Monday the ESB’s proposal should be ripped up and done again because it was designed for a “broken” electricity market designed to benefit existing large-scale electricity generators.

The Energy Users Association of Australia, a group representing some of the nation’s largest corporate energy users, including Woolworths, BlueScope Steel and building material supplier Brickworks, said the differing state-by-state rules risked driving up bills and inflating costs for customers. 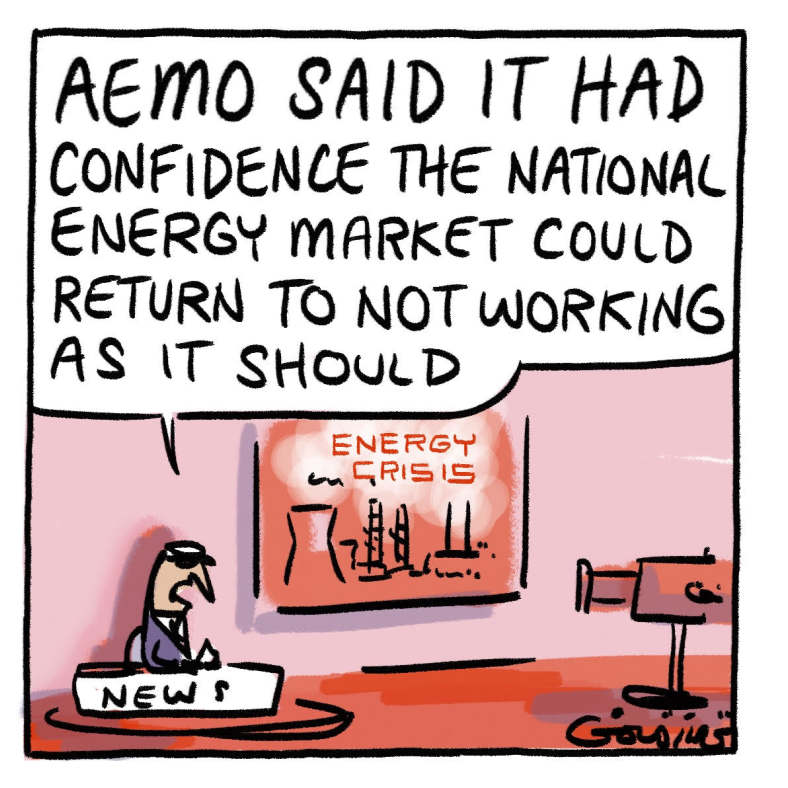 “If you run a business that stretches across multiple jurisdictions then you are dealing with multiple programs and layer upon layer of costs, and it gets very difficult,” chief executive Andrew Richards said.

The east coast electricity system was thrown into chaos last week forcing the Australian Energy Market Operator (AEMO) to seize control of the market for the first time in its history to stabilise power supplies and avert intensifying threats of blackouts in multiple states.

But supply has come surging back, with around four gigawatts, or about one-fifth of the electricity grid’s average demand, coming back online in the past week following the withdrawals, planned outages and some technical failures at coal-fired power stations.

AEMO chief executive Daniel Westerman said on Wednesday generators had been working hard to resolve the crisis, and a “step by step” exit from the suspension would begin early on Thursday morning.

The national competition watchdog has been directed to launch a forensic investigation into energy prices, including an urgent assessment of power companies that Prime Minister Anthony Albanese said had been “essentially gaming the market”.

Australian Industry Group chief executive Innes Willox said the compensation payments made by the market operator would be recouped from households and businesses, which meant that “the bill for the recent acute crisis still needs to be paid”.

“Very few energy users have been directly exposed so far, but sooner or later all of us will pay our share of the very large costs that AEMO has had to incur to keep the lights on.”