Picnic at Hanging Rock is an Australian historical fiction novel by Joan Lindsay. Set in 1900, it is about a group of female students at an Australian girls' boarding school who vanish at Hanging Rock while on a Valentine's Day picnic, and the effects the disappearances have on the school and local community. The novel was first published in 1967 in Australia by Cheshire Publishing and was reprinted by Penguin in 1975. It is widely considered by critics to be one of the best Australian novels.

Although the events depicted in the novel are entirely fictional, it is framed as though it were a true story, corroborated by ambiguous pseudohistorical references. Its unresolved conclusion has sparked significant public, critical, and scholarly analysis, and the narrative has become a part of Australia's national folklore as a result. Lindsay claimed to have written the novel over two weeks at her home Mulberry Hill in Baxter, on Victoria's Mornington Peninsula, after having successive dreams of the narrated events. (Wikipdedia)

Hanging Rock[2] (also known as Mount Diogenes, Dryden's Rock,[3] and to some of its traditional owners as Ngannelong[4]) is a distinctive geological formation in central Victoria, Australia. A former volcano, it lies 718m above sea level (105m above plain level) on the plain between the two small townships of Newham and Hesket, approximately 70 km north-west of Melbourne and a few kilometres north of Mount Macedon.

In the middle of the 19th century, the traditional occupants of the place – tribes of the Dja Dja Wurrung, Woi Wurrung and Taungurung – were forced from it.[5] They had been its occupants for thousands of years[6] and, colonisation notwithstanding, have continued to maintain cultural and spiritual connections with the place.[4]

To the settler colonialist society, Hanging Rock became a place for recreation and tourism. It came alternately under private, government, and mixed public-private control.

In the late 20th century, the area became very widely known as the setting of Joan Lindsay's novel Picnic at Hanging Rock. 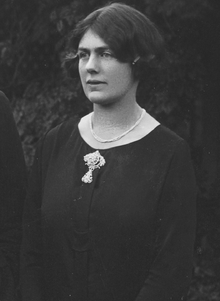 Joan à Beckett Lindsay (16 November 1896 – 23 December 1984), also known as Lady Lindsay,[2] was an Australian novelist, playwright, essayist, and visual artist. Trained in her youth as a painter, Lindsay published her first literary work in 1936 at age forty under a pseudonym, a satirical novel titled Through Darkest Pondelayo. Her second novel, Time Without Clocks, was published nearly thirty years later, and was a semi-autobiographical account of the early years of her marriage to artist Daryl Lindsay.

In 1967, Lindsay published her most celebrated work, Picnic at Hanging Rock, a historical Gothic novel detailing the vanishing of three schoolgirls and their teacher at the site of a monolith during one summer. The novel sparked critical and public interest for its ambivalent presentation as a true story as well as its vague conclusion, and is widely considered to be one of the most important Australian novels.[3][4] It was adapted into a 1975 film of the same name.[5] (Wikipedia)