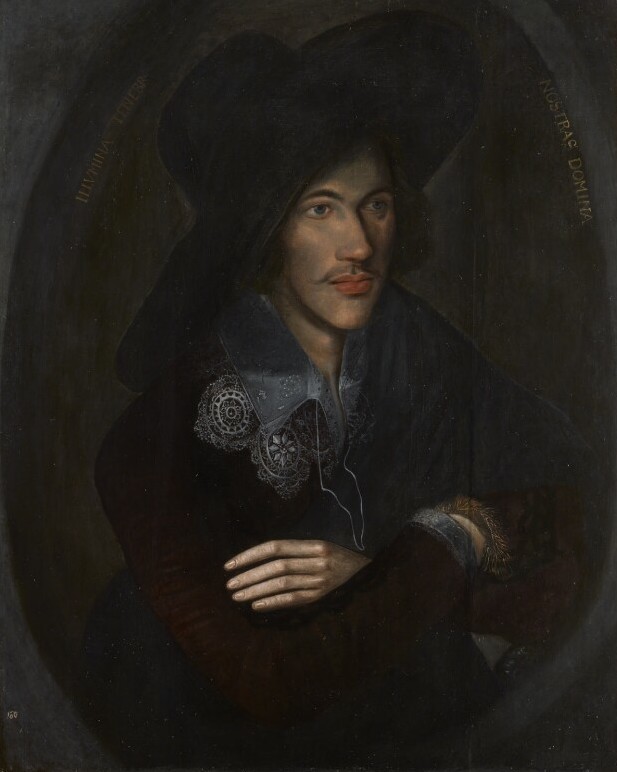 John Donne is now best known as a poet, but in Jacobean England he was most famous for the powerful oratory of his sermons, and for his public role as Dean of St Paul’s Cathedral in London.

Donne was born in London in 1572, the third child of John Donne and Elizabeth Heywood. Elizabeth was the daughter of the Catholic Tudor playwright John Heywood and Joan Rastall, niece of Sir Thomas More. Donne was brought up as a Catholic, and his early life would have been marked by the deprivations and isolation of those who did not subscribe to Protestantism in a Protestant country.

Donne attended Hart Hall, Oxford, between 1584 and 1589, leaving without a degree. In 1592 he was admitted to Lincoln’s Inn, where he studied law and participated in its lively literary culture. Donne never worked as a lawyer, but his knowledge of the law informs all of his poetry and thinking.

Donne had left Lincoln’s Inn by 1596, and was working as secretary to Sir Thomas Egerton by the end of 1597. In Egerton’s household Donne met Ann More, the niece of Lady Egerton, and they married in secret in 1601. The marriage caused a scandal when it was revealed the following year, and Donne lost his position and was briefly imprisoned. Donne and Ann would have to rely on friends and sympathetic family members for accommodation and financial support for their growing family for many years afterwards. (Read more at the source: The British Library)

Read about Donne on poets.org

Articles on the web

John Donne’s standing as a great English poet, and one of the greatest writers of English prose, is now assured. However, it has been confirmed only in the early 20th century. The history of Donne’s reputation is the most remarkable of any major writer in English; no other body of great poetry has fallen so far from favor for so long and been generally condemned as inept and crude. In Donne’s own day his poetry was highly prized among the small circle of his admirers, who read it as it was circulated in manuscript, and in his later years he gained wide fame as a preacher. For some 30 years after his death successive editions of his verse stamped his powerful influence upon English poets. During the Restoration his writing went out of fashion and remained so for several centuries. Throughout the 18th century, and for much of the 19th century, he was little read and scarcely appreciated. Commentators followed Samuel Johnson in dismissing his work as no more than frigidly ingenious and metrically uncouth. Some scribbled notes by Samuel Taylor Coleridge in Charles Lamb‘s copy of Donne’s poems make a testimony of admiration rare in the early 19th century. Robert Browning became a known (and wondered-at) enthusiast of Donne, but it was not until the end of the 1800s that Donne’s poetry was eagerly taken up by a growing band of avant-garde readers and writers. His prose remained largely unnoticed until 1919.

In the first two decades of the 20th century Donne’s poetry was decisively rehabilitated. Its extraordinary appeal to modern readers throws light on the Modernist movement, as well as on our intuitive response to our own times. Donne may no longer be the cult figure he became in the 1920s and 1930s, when T.S. Eliot and William Butler Yeats, among others, discovered in his poetry the peculiar fusion of intellect and passion and the alert contemporariness which they aspired to in their own art. He is not a poet for all tastes and times; yet for many readers Donne remains what Ben Jonsonjudged him: “the first poet in the world in some things.” His poems continue to engage the attention and challenge the experience of readers who come to him afresh. His high place in the pantheon of the English poets now seems secure.

Donne’s love poetry was written nearly four hundred years ago; yet one reason for its appeal is that it speaks to us as directly and urgently as if we overhear a present confidence. For instance, a lover who is about to board ship for a long voyage turns back to share a last intimacy with his mistress: “Here take my picture” (Elegy 5). Two lovers who have turned their backs upon a threatening world in “The Good Morrow” celebrate their discovery of a new world in each other:

Let sea-discoverers to new worlds have gone,
Let maps to others, worlds on worlds have shown,
Let us possess one world, each hath one, and is one.

(Source: The Poetry Foundation. Read the rest on the website.

Few historical concepts have such powerful resonance as the Renaissance. Usually used to describe the rediscovery of classical Roman and Greek culture in the late 1300s and 1400s and the great pan-European flowering in art, architecture, literature, science, music, philosophy and politics that this inspired, it has been interpreted as the epoch that made the modern world truly modern. But the term ‘renaissance’ (French for ‘rebirth’) was never used during the period itself – it was invented by 19th-century historians – and its remit is still hotly disputed. Did the Renaissance begin in late 14th-century Italy, during what’s usually regarded as the Middle Ages, or only flower in northern Europe a century later, in the aftermath of the Protestant Christian Reformation? Does it describe a cultural, historical and economic moment, or a gradual process – and, if so, when did it end? Did man really ‘re-find himself’, as one French historian later wrote? Or does the word describe something much subtler and more indefinable? (Read more at the source: Key features of Renaissance culture - The British Library)

The Fall of the Rebel Angels is an oil-on-panel by the Netherlandish Renaissance artist Pieter Bruegel the Elder, painted in 1562. (Photo source: Wikimedia Commons)

Explore the Renaissance in Art in Google Arts and Culture