Neo-Nazism consists of post-World War II militant social or political movements seeking to revive and implement the ideology of Nazism. Neo-Nazis seek to employ their ideology to promote hatred and attack minorities, or in some cases to create a fascist political state.[1][2] It is a global phenomenon, with organized representation in many countries and international networks. It borrows elements from Nazi doctrine, including ultranationalism, racism up to xenophobia, ableism, homophobia, anti-Romanyism, antisemitism, anti-communism and initiating the Fourth Reich. Holocaust denial is a common feature, as is the incorporation of Nazi symbols and admiration of Adolf Hitler.

In some European and Latin American countries, laws prohibit the expression of pro-Nazi, racist, anti-Semitic, or homophobic views. Many Nazi-related symbols are banned in European countries (especially Germany) in an effort to curtail neo-Nazism.[3]  (Read more on Wikipedia)

Nazism is a form of fascism and showed that ideology's disdain for liberal democracy and the parliamentary system, but also incorporated fervent antisemitism, scientific racism, and eugenics into its creed. Its extreme nationalism came from Pan-Germanism and the Völkisch movement prominent in the German nationalism of the time, and it was strongly influenced by the anti-Communist Freikorps paramilitary groups that emerged after Germany's defeat in World War I, from which came the party's "cult of violence" which was "at the heart of the movement."[2]

Nazism subscribed to theories of racial hierarchy and Social Darwinism, identifying the Germans as a part of what the Nazis regarded as an Aryan or Nordicmaster race.[3] It aimed to overcome social divisions and create a German homogeneous society based on racial purity which represented a people's community (Volksgemeinschaft). The Nazis aimed to unite all Germans living in historically German territory, as well as gain additional lands for German expansion under the doctrine of Lebensraum and exclude those who they deemed either community aliens or "inferior" races. (Read more on Wikipedia) 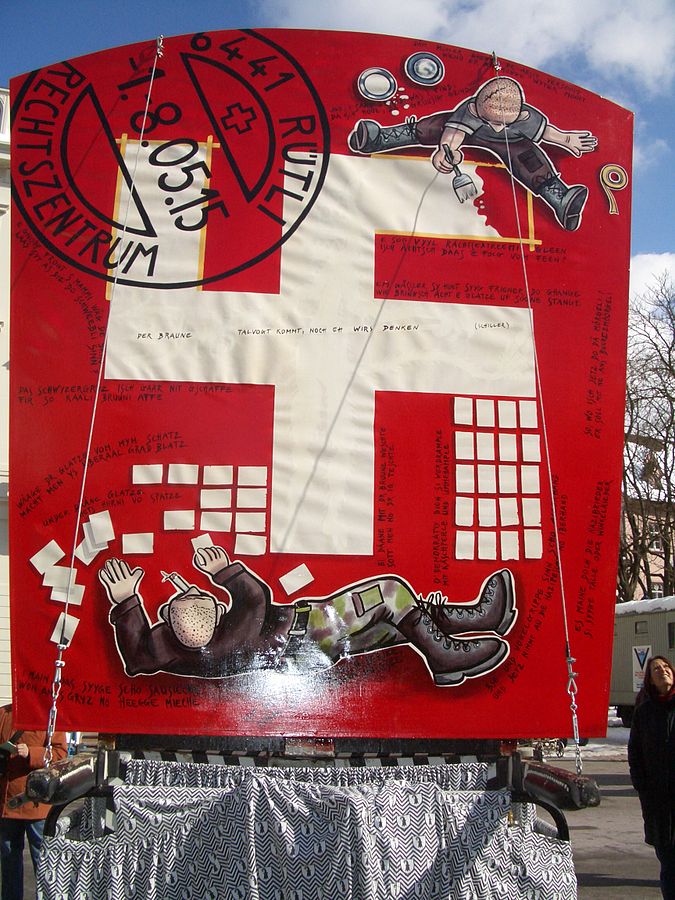 Art Jones, a leader in a Chicago NeoNazi group in the late 1970s and early 1980s, with Thomas Robb, a leader of a Ku Klux Klan group (Photo source: Wikimedia)