The way women use the English language: is it self-determined or a result of enculturation.

The difficulties that arise when we believe and allow ourselves to be swept up in the way women are represented in language. Result: sexism, misogyny.

We need to look at the patterns that women use that allow them to be designated in these ways.

The influence of those attitudes on women.

When you were a young child your mother was unlikely to say to you: Look at this magenta jacket I bought for you from Henry Bucks.

Generally women are more prepared to engage in 'small talk' or 'chit-chat', fulfilling a phatic, supportive function. Why? to find common ground with others, to form community relationships.

Women are conditioned from an early age to seek approval and to defer to, or to be defenrential to others, who include superordinates, elders (especially older women) and men.

Sexist ideas encoded in aphorisms, eg Oscar Wilde: Women are a decorative sex, they never have anything to say but they say it charmingly.

CHinese proverb: a woman's sword is her tongue, she will not let it rust.

Watch Hannah Gatsby and Nanette. An Australian lesbian from Tasmania. (Netflix) Sexual orientation and gender, the difficulty she had growing up in Tasmania. Homosexuality was illegal at that time. She was enculturated as homophobic but she was a lesbian, so result was she had self-loathing. Now she says she no longer wants to make these jokes. She points a finger at the dominant male culture.

Robin Lakoff in 'Language and Women's place' (1975) backed up his finding.

Women use more HRT or Uptalk? Do they?

A recent trend towards gravelly voice.

Non-standard forms correlate no only with working class speech but also with male speech.

Higher modality (must, ought, will)

In discourse they interrupt and are interrupted more frequently

Men use language to get things done.

What we learned from having a female PM 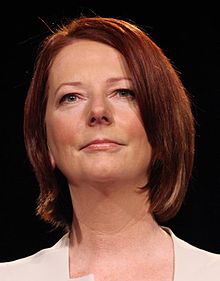 Julia Gillard's accent was much remarked upokn by public and journalist.

Her speech was described as 'her voice has all the charm of a black pudding being fed through a mincer.' She was apparently too broad