The Myall Creek Massacre (June 10, 1838) Note the rope binding the Aboriginal people together and the little child on the back of her mother on the far right. Published in The Chronicles of Crime, 1841. (Source) 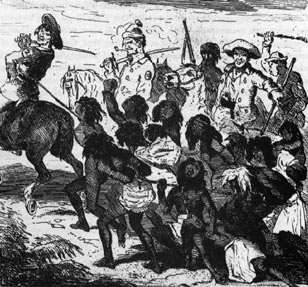 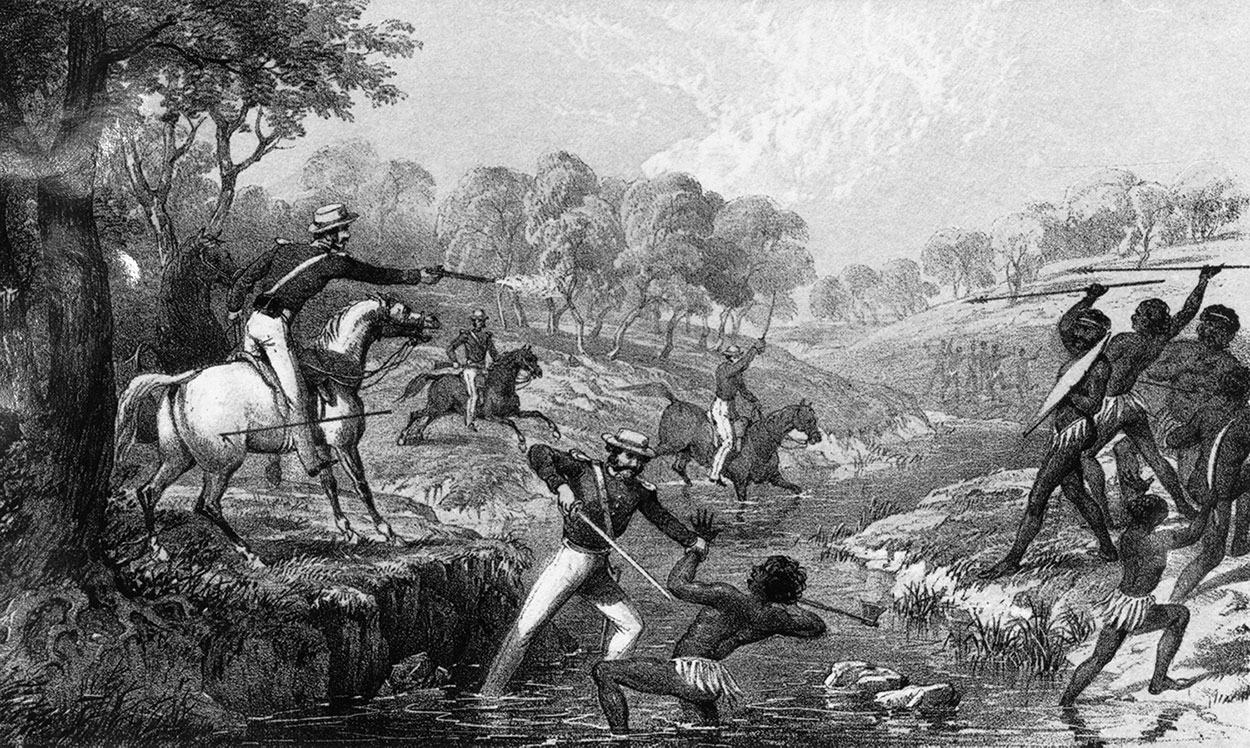 An illustration of the explorer Charles Sturt's party being "threatened by blacks at the junction of the Murray and Darling, 1830", near Wentworth, New South Wales. (Wikipedia) 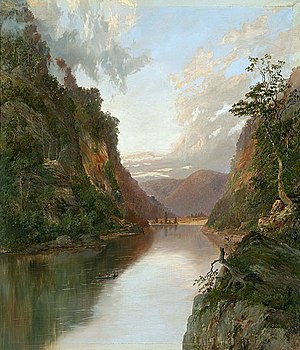 The Hawkesbury and Nepean Rivers, 1881

Residents of the Carrolup mission gathered for a photo (Supplied: Dumbartung Aboriginal Corporation) 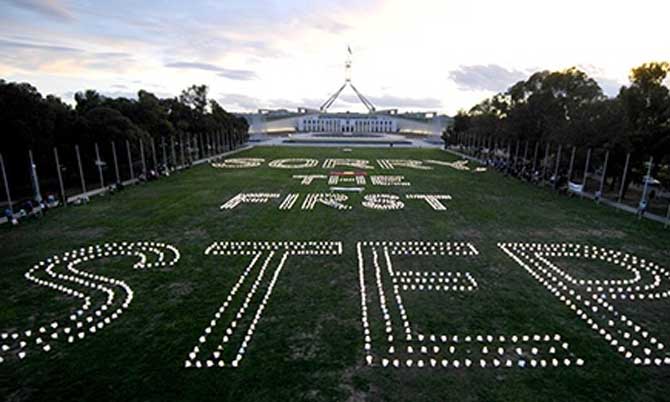 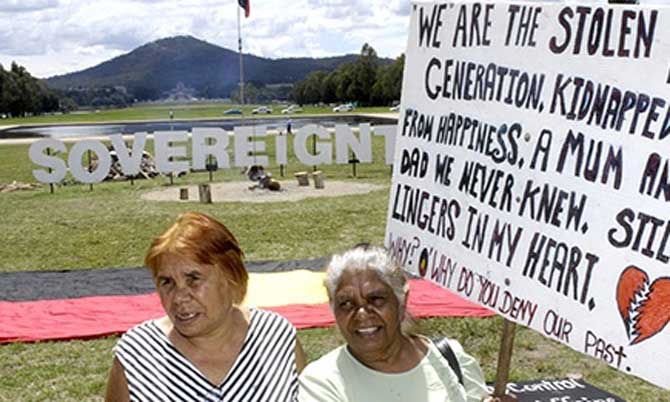 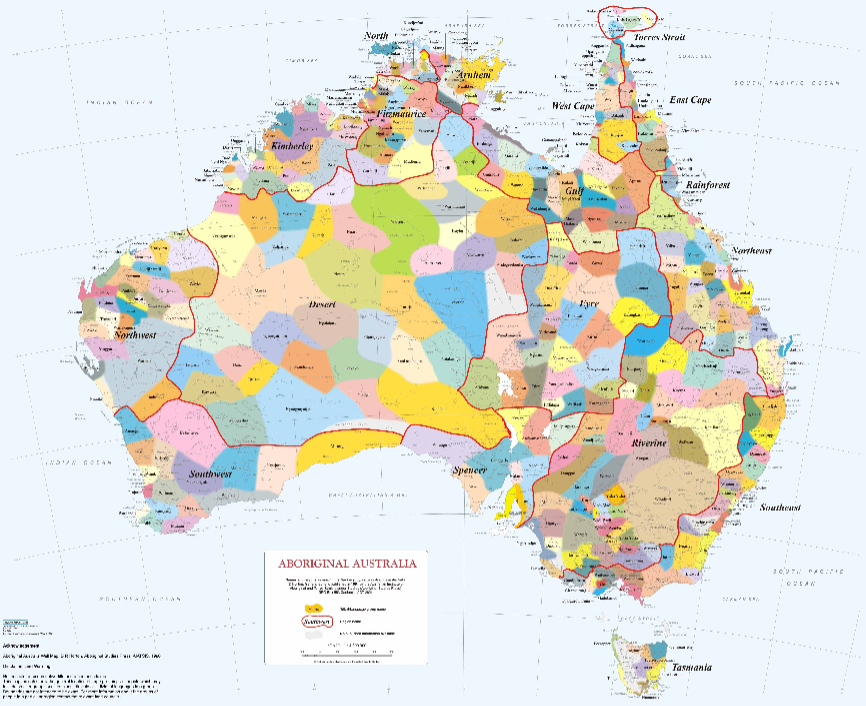 See the AIATSIS map of Indigenous Australia
Map showing the distribution of the Aboriginal tribes of Australia / by Norman B. Tindale
Living archive of Aboriginal languages

A 'Slave Map of Modern Australia' from the 1890s is strong evidence that conditions akin to slavery did exist in Australia. [6] Source Selling slaves in the heat of the blackbirding period. (Source)

The European reaction to the death of James Cook revealed the conflicting stereotype of the ‘brutal savage’. Johanne Zoffany, The Death of Captain James Cook, 1779 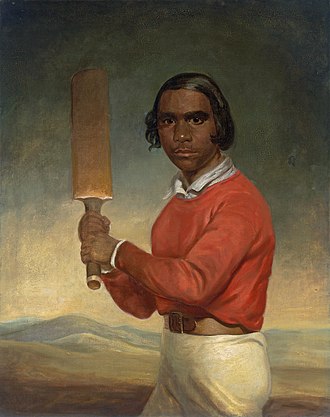 This portrait of a young Indigenous boy was commissioned by a member of a Christian mission station to show the achievements of the mission at "civilising" the Indigenous population.

Trove - excellent editorial article in context of the time
Search: "However outrageous the aborigines may have comported themselves..."

Gough Whitlam pours soil into the hands of Vincent Lingiari, symbolically handing the Wave Hill station in the back to the Gurindji people in 1975. 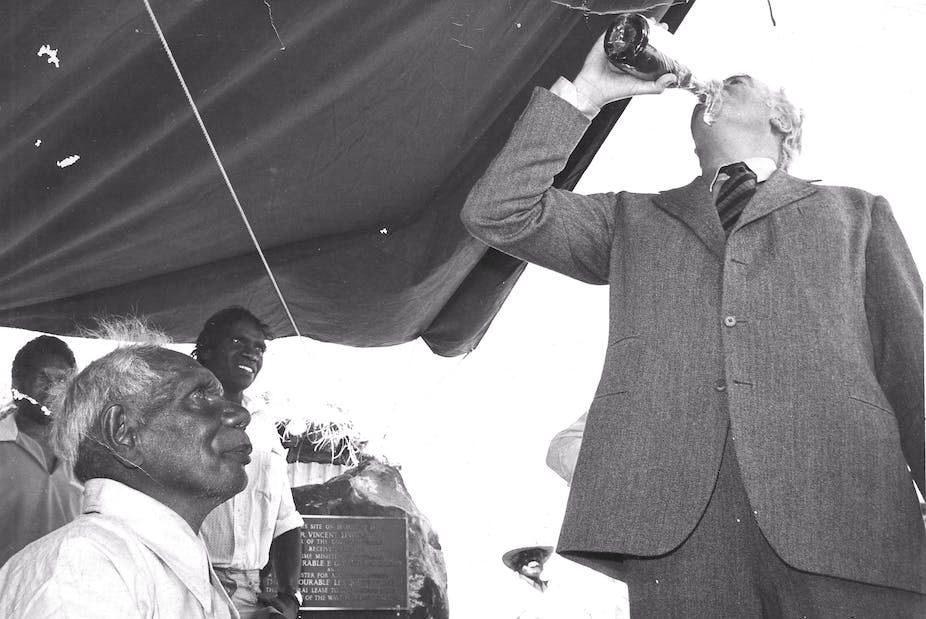 Ten things you should know about the national apology This 1993 photograph of Nicky Winmar is one of the most famous in Australian sporting history. (Source: Wikipedia)

In a match for St Kilda against Collingwood in Round 4 of the 1993 season, Winmar was racially abused by members of the Collingwood cheersquad, who yelled for him to "go and sniff some petrol" and "go walkabout where you came from".[13] At the conclusion of the game, which St Kilda won by 22 points, Winmar lifted up his jumper and, facing to the crowd, pointed to his skin. The following day, a photograph (pictured right) of Winmar's gesture, taken by Wayne Ludbey, was published in the Sunday Age under the headline "Winmar: I'm black and proud of it", with the Sunday Herald Sun publishing a similar photograph under the caption "I've got guts".[4] Winmar's gesture, described as a "powerful statement", an "anti-racist symbol",[38] and one of the "most poignant" images in Australian sport, has been credited as a catalyst for the movement against racism in Australian football,[1] and compared to the black power salute performed by American athletes at the 1968 Summer Olympics in terms of impact.[39][40] The event inspired Indigenous singer-songwriter Archie Roach to write the song "Colour of Your Jumper".[41] The photograph is reproduced in The Game That Made Australia, a mural painted by Jamie Cooper and commissioned by the AFL in 2008 to celebrate the 150th anniversary of the origins of Australian rules football.[42] Tony Albert included a watercolour of the photograph in a collage titled Once upon a time, winner of the 2014 Basil Sellers Art Prize.[43] (Source: Wikipedia)

Depiction of Indigenous Australians in fiction 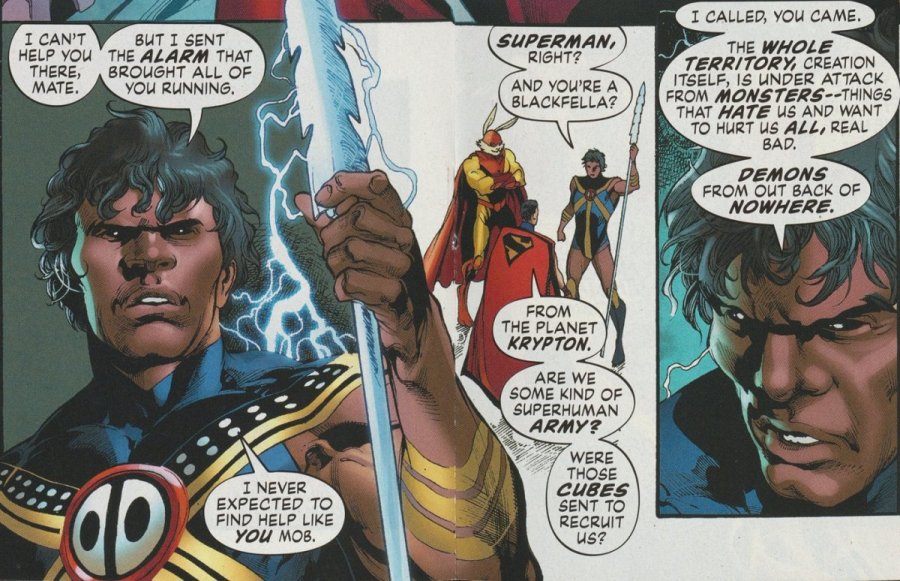 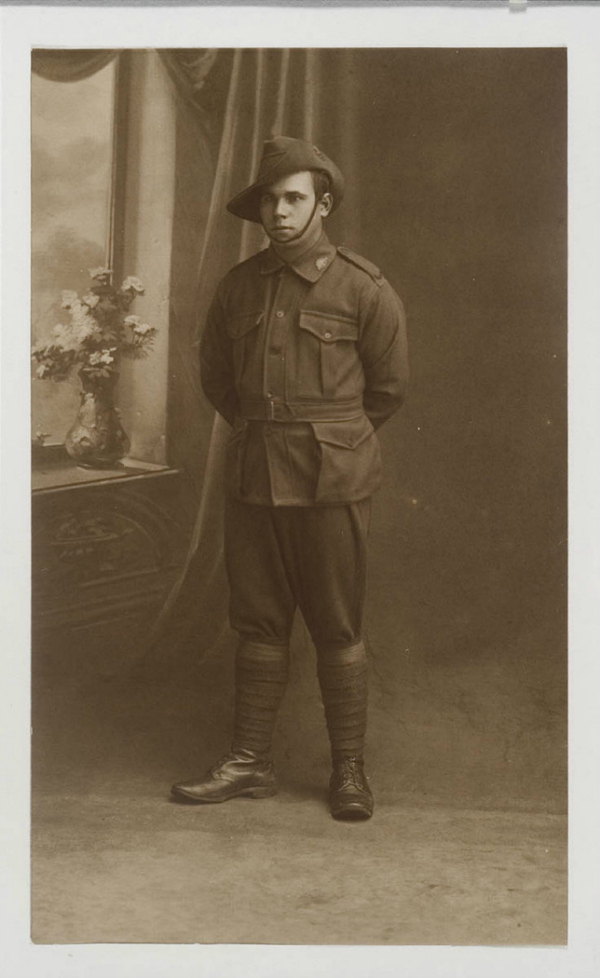 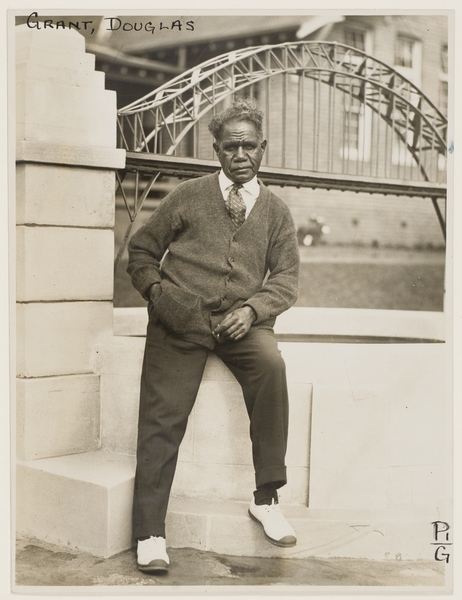 Douglas Grant, draughtsman and soldier, with his ornamental pond and Harbour Bridge, Callan Park, between 1932-1940.

Did you know? Aboriginal and Torres Strait Islander Australians have fought for the nation in every war since Federation in 1901.

Read about the Stafford Brothers.

An Aboriginal soldier from Thursday Island, which is off the far north coast of Australia (open link for photo) The Aboriginal cricket team pictured with their captain and coach Tom Wills at the Melbourne Cricket Ground, December 1866. (Wikipedia)

The Aboriginal team playing against Melbourne Cricket Club at the MCG, early 1867 (Wikipedia) 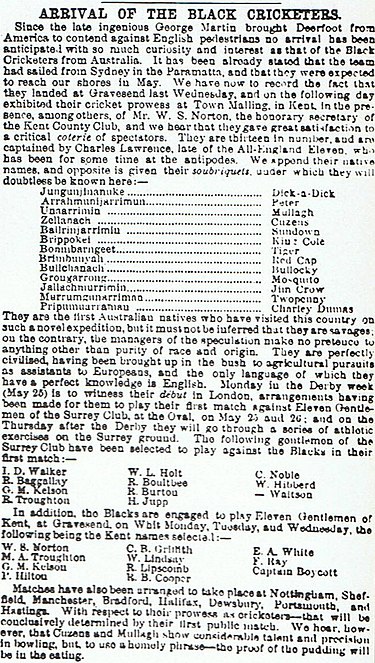 The Sporting Life, London 16 May 1868: The arrival of the Australian Aboriginal cricket team in England. (Wikipedia)

Uluru Statement from the Heart can be downloaded here. 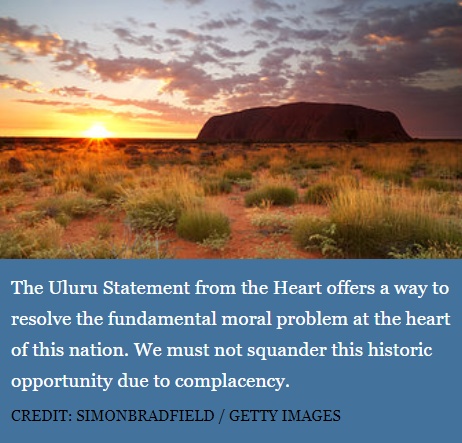 Geoffrey Gurrumul Yunupingu (22 January 1971 – 25 July 2017), also referred to since his death as Dr G Yunupingu,[note 1][3][4][5] was an Indigenous Australianmusician.[6] A multi-instrumentalist, he played drums, keyboards, guitar (a right-hand-strung guitar played left-handed) and didgeridoo, but it was the clarity of his singing voice that attracted rave reviews. He sang stories of his land both in Yolŋu languages such as Gälpu, Gumatj or Djambarrpuynu, and in English.[6][7] Although his solo career brought him wider acclaim, he was also formerly a member of Yothu Yindi, and later Saltwater Band.[6] He was the most commercially successful Aboriginal Australian musician at the time of his death.[6] (Source: Wikipedia)