In this area of study students consider the effects of the global spread of English by learning about both the development and decline of languages as a result of English contact, the elevation of English as a global lingua franca and the cultural consequences of language contact.
Students explore the ways English is used as an expression of culture in a range of literary, transactional and popular-culture texts.
Students explore factors that contributed to the spread of English in the past, such as trade and colonisation, and factors that continue to contribute to the spread of English today.
Students consider the consequences of the growth of English as an additional or a foreign language, including the development of English-based pidgins, creoles and other varieties, and its effect on indigenous languages around the world.
Students become familiar with the distinctive features of a number of national, ethnic and regional varieties of English and explore the ways that these varieties show the effects of intensive contact with other languages. They examine the ways that multilingual speakers use code-switching to mark identity and as a means of inclusion or exclusion.
Students explore how change to and loss of language affects its users’ cultural identities and worldviews, as evidenced by the indigenous and migrant language reclamation and maintenance movements in contemporary Australian society.
Students build on their knowledge that language encodes social and cultural understandings by exploring the concepts of linguistic relativism and determinism.

On completion of this unit the student should be able to describe and explain the effects of the global spread of English in terms of both conformity and diversity, through a range of spoken and written texts. To achieve this outcome the student will draw on key knowledge and key skills outlined in Area of Study 2.

• factors in the development of English as a world language
• the distinctive features of national and regional varieties of English
• the distinctive features of pidgins, creoles and English as a lingua franca
• the role of language as an expression of cultures and worldviews, including representations of worldviews in texts
• the concepts of linguistic relativism and determinism Unit 2: Language change VCE English Language 2016–2020 15
• the processes of language maintenance, shift, and reclamation
• cultural and social effects of language change and loss, with particular reference to Australian Aboriginal languages
• metalanguage to discuss the global spread of English. Key skills
• define key linguistic concepts as they relate to the development of English as a world language
• use key concepts and metalanguage appropriately to identify, describe and analyse the different varieties of English that have developed as a result of the spread of English
• explore and analyse the effects of the global spread of English as reflected in texts

Australian Style is a blog on English in Australian, published by linguist experts and supported by the Australian Government Information Management Office (AGIMO). 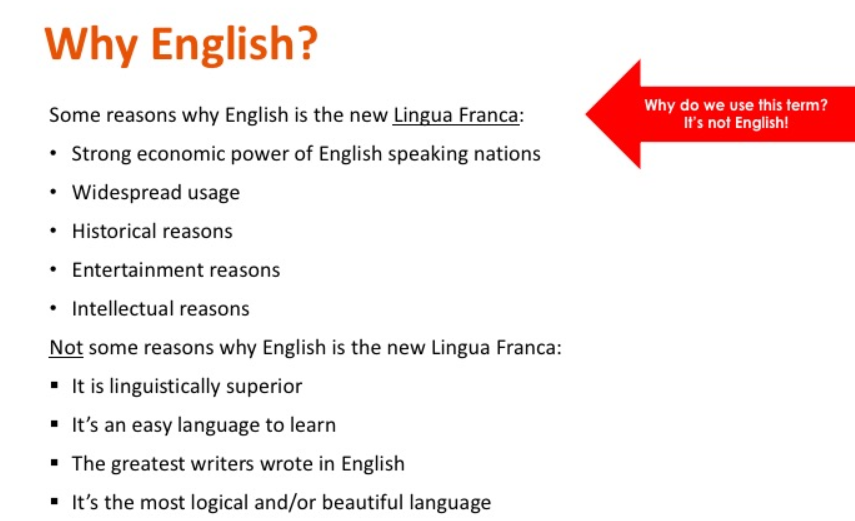 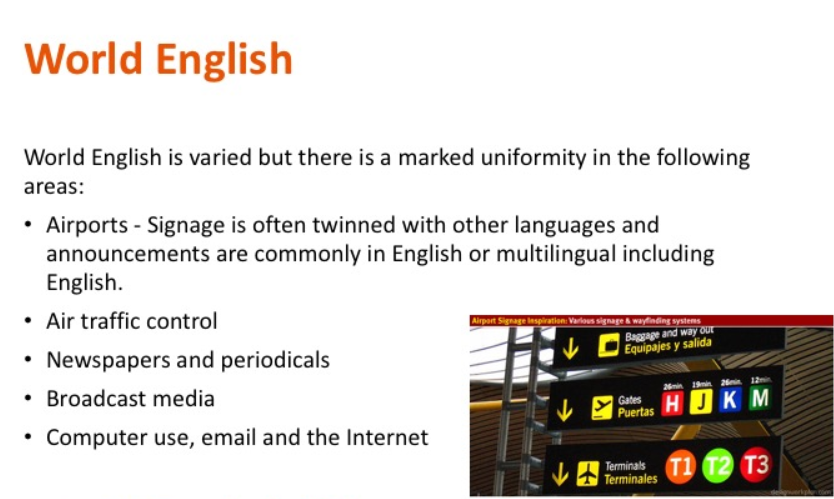 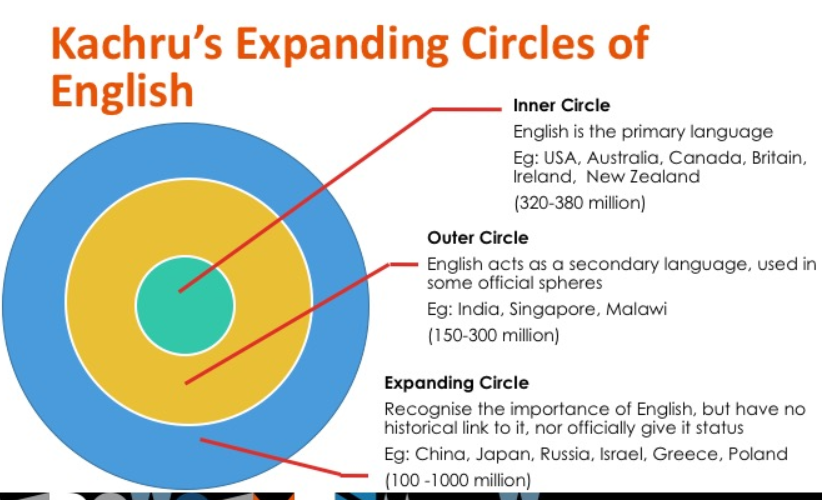 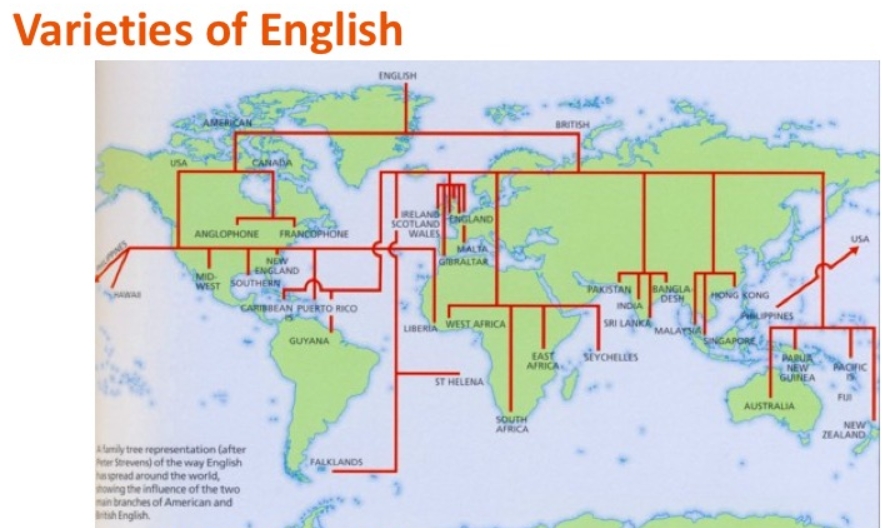 From the Gold Rush (ANU) 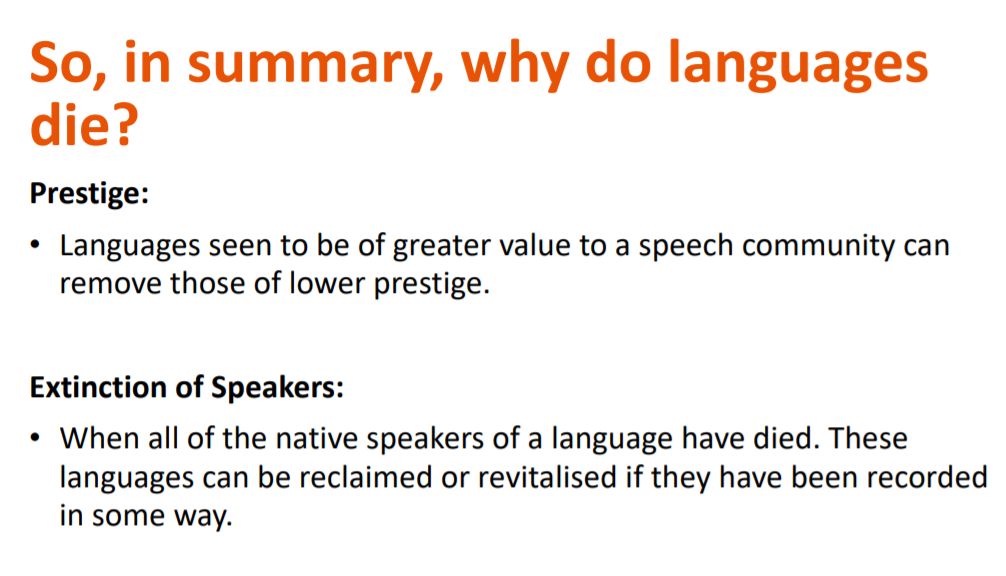 15. Globalisation: The good, the bad, and the ugly 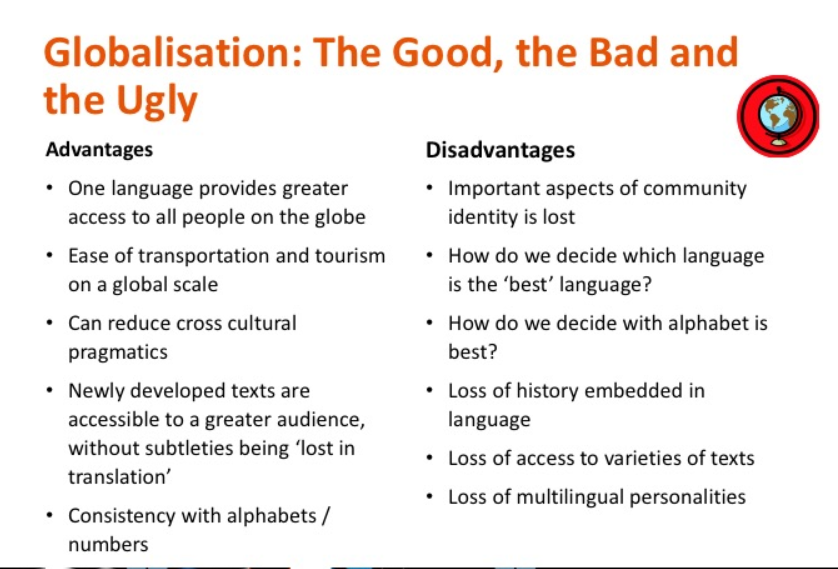 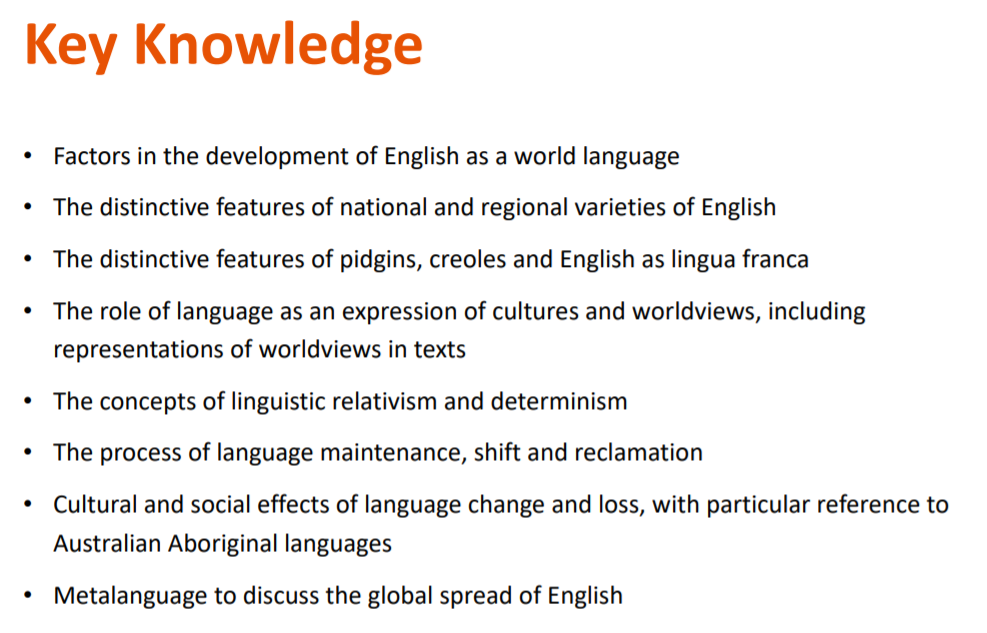 English as a lingua franca (ELF) is the use of the English language as "a common means of communication for speakers of different first languages".[1] ELF is also "defined functionally by its use in intercultural communication rather than formally by its reference to native-speaker norms"[2] whereas English as a foreign language aims at meeting native speaker norms and gives prominence to native speaker cultural aspects.[3] While lingua francas have been used for centuries, what makes ELF a novel phenomenon is the extent to which it is used – both functionally and geographically. A typical ELF conversation might involve Swedish and Japanese business people chatting at a coffee break during an international conference held in Nairobi, or an Argentinian tourist asking a local for the way in Berlin. (Source) 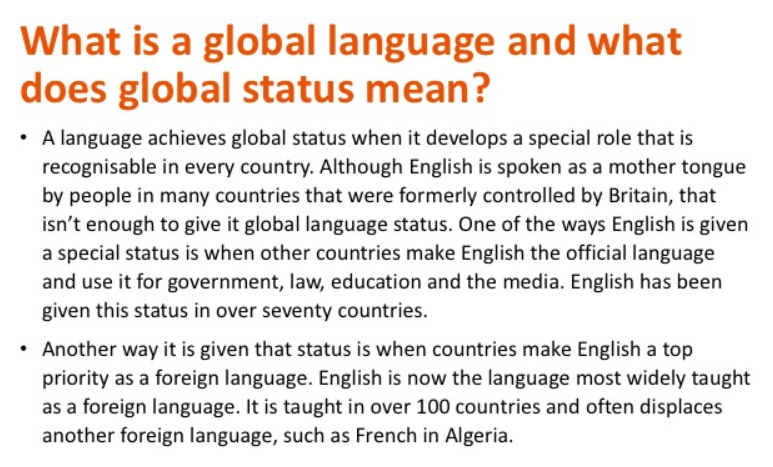 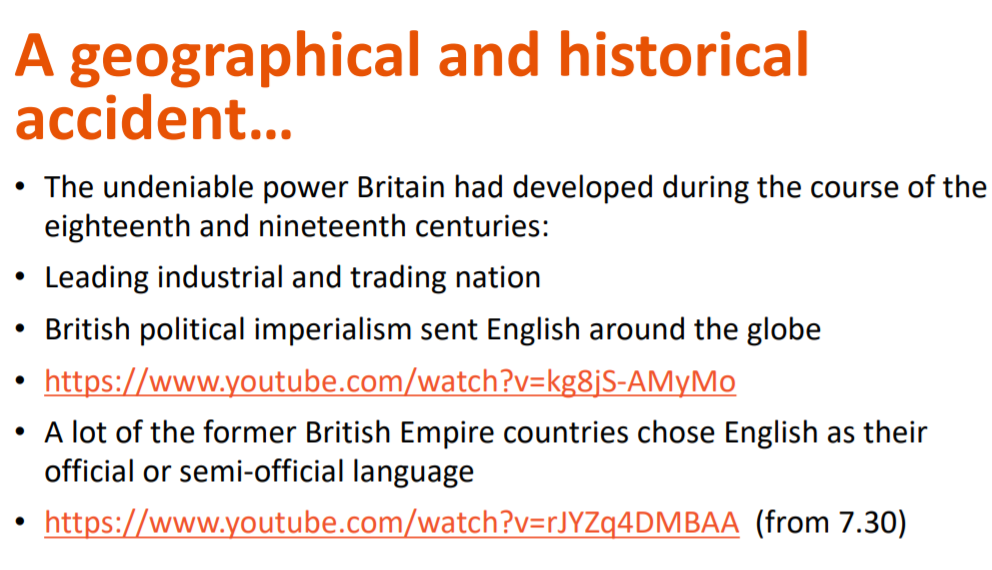 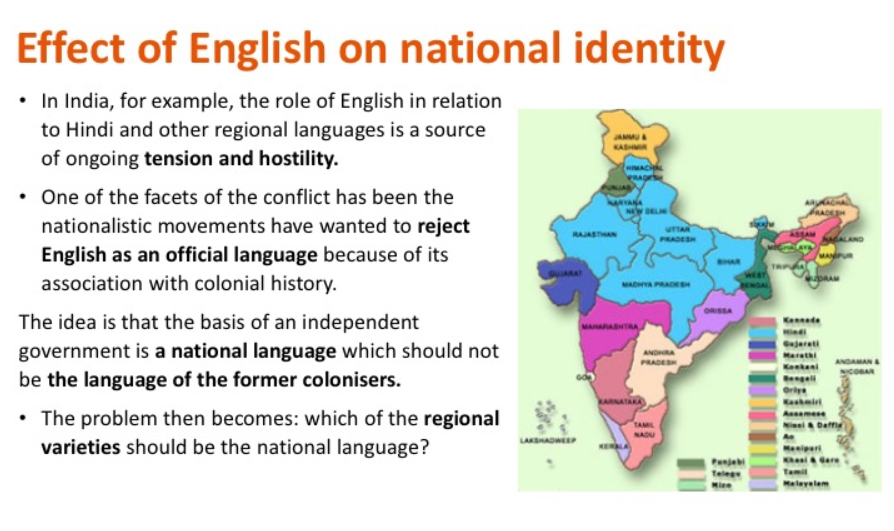 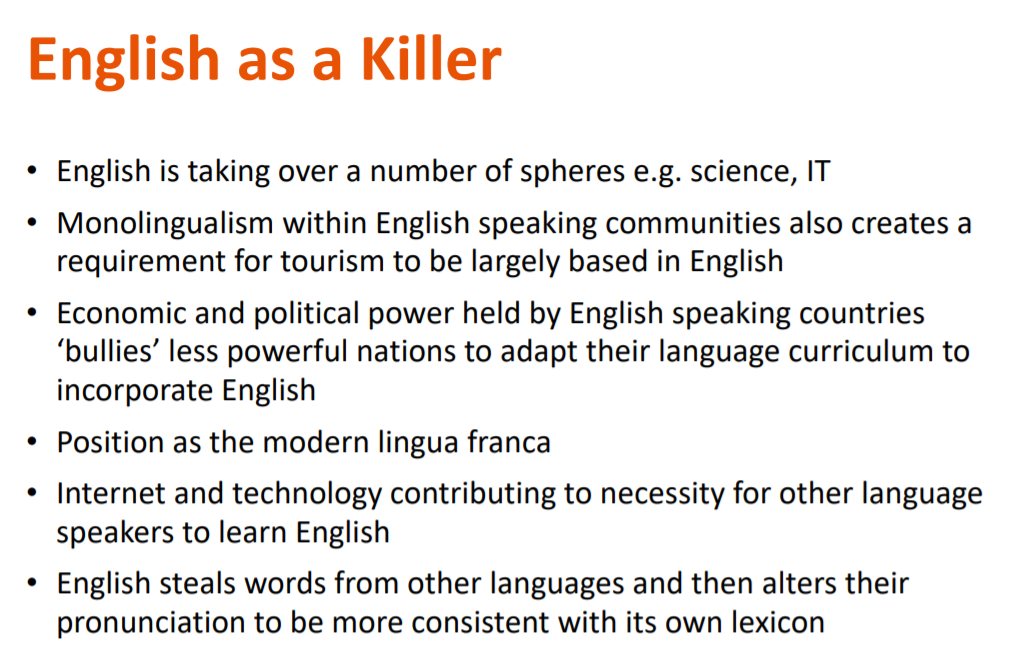 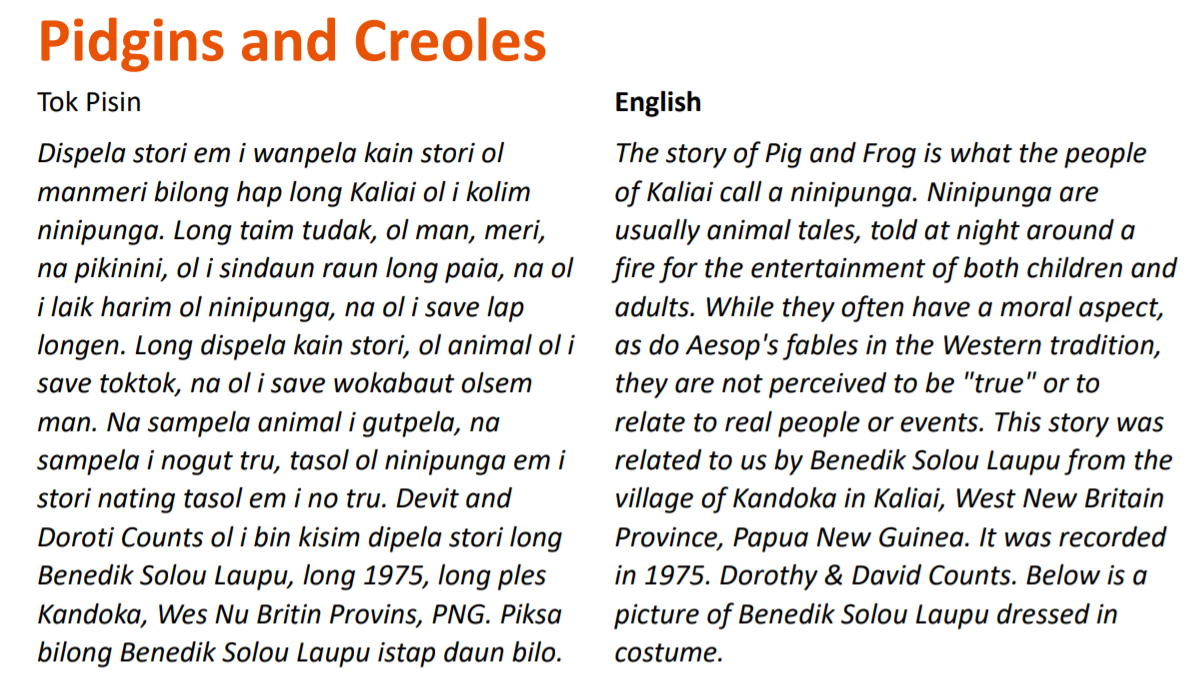