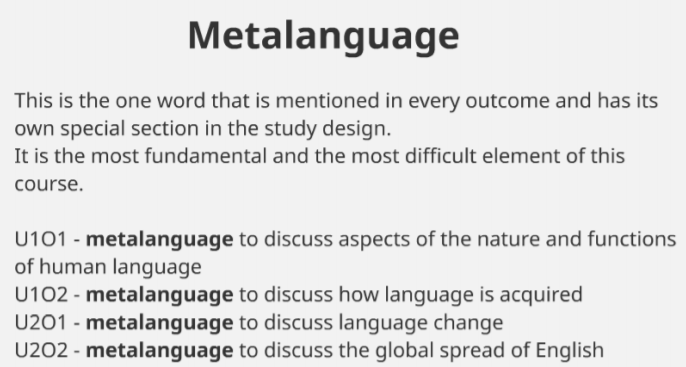 This year you will be investigating, exploring and analysing the nature, functions and evolution of English.

Unlike English and Literature, there are not any set novels for English Language. Instead you are encouraged to start taking notice of and saving a wide range of contemporary and historical texts in a variety of forms over years 11 and 12. Some of the texts will be examples of the various varieties of English and others should be texts about language and linguistics. From now on, when you hear English spoken (eg. TV, podcasts, Youtube, conversations) or see it in written form (eg. media, advertising, social media) you will save these examples (where possible) and start looking at the way language works in them. As you build your metalanguage glossary, you will be able to analyse these examples using the metalanguage like a linguist!

Understanding the subsystems and metalanguage is vital to experience success in English Language.

Key skills you will require to be successful in this subject.

In order to do well in this subject, you must:

Welcome to the MHS English Language page for Units 1/2. If you need help locating or using English Language resources, you can contact me (Tania Sheko) in Teams or email me tania.sheko@mhs.vic.edu.au.