The Library of Congress 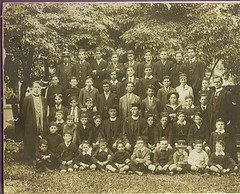 A Primary source is an artifact, a document, a recording, or other source of information that was created at the time that you wish to write about.

Primary sources not only document the details of the event, but include perceptions, discussions, etc. from that time.

Australianscreen Australia's audiovisual heritage. This site has film clips and notes from Australian film and television.

National Archives of Australia " From dramatic events that shaped the nation to decisions that touched the lives of individual Australians, the records the National Archives holds are about people – from the ordinary to the famous – and their interactions with the Australian Government."

Picture Australia See pictures of Australia’s past and present including: photographs, objects, maps and works of art.

by David Koeller, Ph.D.
Professor of History at a
Smalll Liberal Arts College in
Chicago, IL

Trove is an online search engine developed by the National Library of Australia. At the click of a button, you can access a large and unrivalled repository of Australian material.